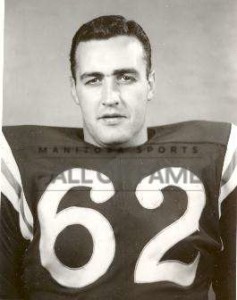 Roger Savoie was a kid from St. Boniface who played for the Winnipeg Rods before being able to more than hold his own for the Bombers for an amazing 16 seasons. Nicknamed ‘Baby Bull,’ Savoie morphed into an all-star lineman for the Bombers and played in seven Grey Cups, winning four. He was a versatile battler during his playing days and is also a member of the Manitoba Sports Hall of Fame.