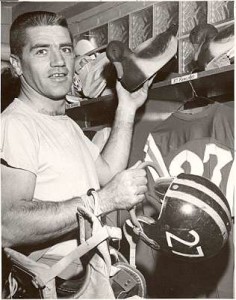 Born and raised in Montreal, Gord Rowland was a member of the Montreal Stelco team that came to Winnipeg and won the Canadian Senior Men’s Soccer Championship. The next year he was invited to try out with the Bombers but was cut. A year later, in 1954, he tried again and not only made the team but began a 10-year career that was all about winning.

Rowland was part of four Grey Cup championship teams, was a five-time all-star, and when he retired, was second on the Bombers all-time punt return and interceptions list. He then turned to coaching, helping the University of Manitoba Bisons to two Vanier Cups as an assistant.