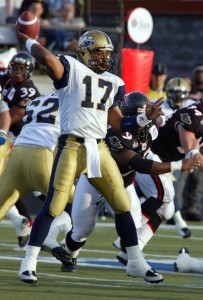 Khari Jones came along at a time when the Bombers were looking for some sort of saviour, a new face to represent the franchise. Picked up in a trade with the B.C. Lions, Jones took over the starting QB chores from Kerwin Bell during the 2000 season and helped lead the Bombers to the East Final. A year later, the Bombers were 14-4 and the club was going through a stretch of domination in which Jones and Milt Stegall, in particular, assaulted the record books.

An easy going sort who hid a fiery passion for the game, Jones threw for 139 touchdowns during his stint at the controls, including a club record 48 in 2002, a year in which he also set the Bomber record with 5,334 passing yards.