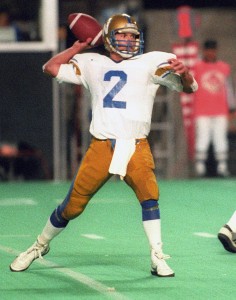 Tom Clements was already a decorated quarterback by the time he was traded to the Bombers – for Dieter Brock – as a two-sport high school star in Pittsburgh who turned down a scholarship to play basketball at North Carolina to play football at Notre Dame.

He led the Fighting Irish to a national title in 1973, was the CFL’s top rookie in 1975 as a member of the Ottawa Rough Riders, led the Riders to the 1976 Grey Cup with his memorable game-winning pass to Tony Gabriel. He was 30 and a five-time all-star when he arrived in Winnipeg and finished his playing days in blue and gold with the most spectacular play in his career.

Clements became a lawyer after his playing days before returning to football as a coach with Notre Dame and then in the NFL with New Orleans, Kansas City, Pittsburgh, Buffalo and Green Bay.