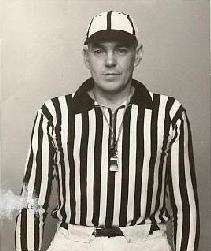 Bill Nairn was born and raised in Winnipeg and joined the Winnipeg Football Club in 1936 – one year after his Winnipeg Victorias lost to them in the city final and he watched as they became the first western cub to capture the Grey Cup. Nairn would help the Blue Bombers capture the 1939 Grey Cup. In 1945, he was part of the Bombers coaching staff as they won another championship.

It was during his playing days that Nairn first started his career as an official, refereeing high school and junior games. He was a CFL official from 1946-59 and was part of the crews that worked 12 Grey Cup games, including the infamous 1962 Fog Bowl.

He was made an Honourary Life Member of the Manitoba Football Officials Association in 1964 and inducted into the Winnipeg Football Club Hall of Fame in 1985.