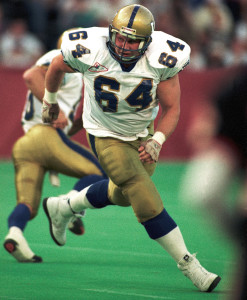 A first-round draft pick of the Blue Bombers in 1985 (9th overall), Molle arrived in Winnipeg having already won a silver medal in wrestling in the XXIII Olympics in Los Angeles in 1984.

He used his scrappy toughness to be an important cog on the Bombers offensive line and was a member of Grey Cup championship teams in 1988 and 1990.