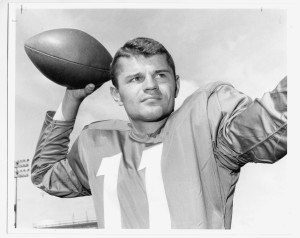 Ken Ploen’s No. 11 is one of only three numbers – along with Jeff Nicklin’s 28 and Tommy Lumsden’s 75 – officially unavailable to players. And with good reason, for Ploen is an absolute icon in these parts. Ploen came to Winnipeg just months after being named the MVP of Iowa’s victory in the 1957 Rose Bowl. He would help the Bombers to four Grey Cup titles during his days and was so gifted an athlete that he earned an all-star berth in 1959 as a defensive back after leading the team with what was then a club record 10 interceptions.

He retired in 1967 as the CFL’s sixth all-time leading passer and was voted the Bombers offensive player of the half century upon the club’s 50th anniversary in 1980.