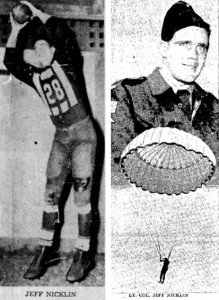 Jeff Nicklin, born in Fort William, Ontario and raised in Winnipeg, made the Winnipegs lineup in 1934 and was part of the 1935 Grey Cup championship team – the first for a Western-based squad. He was named to the all-star team for the first time in 1937 and again in 1939, capping a year in which the club captured its second Grey Cup. Nicklin was sent overseas to Europe as part of the Royal Winnipeg Rifles and was then named the Commanding Officer of the 1st Canadian Parachute Battalion.

He was one of the first Canadians to jump on D-Day in 1944, led his division in the Battle of the Bulge and was among the first to jump into Germany as part of Operation Varsity in March of 1945. Alas, his chute got tangled up in a tree and he was shot and killed as he tried to wrestle free.

As a tribute to Nicklin, the 1st Canadian Parachute Battalion donated the Jeff Nicklin Memorial Trophy to the Western Interprovincial Football Union in 1946, and it is awarded annually to the top player in the Canadian Football League’s West Division.