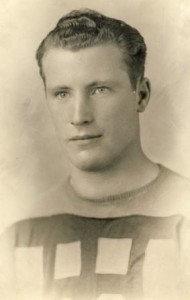 Ches McCance played his junior football in Winnipeg and graduated to the Bombers in 1937 as a two-way end who also handled the kicking chores. He was a Grey Cup champion in 1939 and 1941 with the Bombers and in the ’41 championship, he kicked two field goals and two converts in the win. After his days with the Bombers, he joined the Montreal Alouettes as a player and assistant coach, winning another title in 1949. He was also an adept curler, serving as the third on Ken Weldon’s Quebec squad in the 1952 and 1953 Briers.