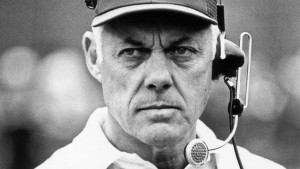 Grant is a legend to this day in these parts as the iconic coach who led the Bombers to four Grey Cup championships. He has a bronze statue honouring him outside Investors Group Field. He’s also remembered as the face of the Minnesota Vikings for decades and a member of both the Canadian Football and Pro Football Hall of Fame.

Grant was also an exceptional athlete long before he pulled on a headset with the Bombers. He was a three-sport athlete – baseball, football and basketball – at the University of Minnesota who was drafted by the Philadelphia Eagles and the Minneapolis Lakers of the NBA, winning a championship in 1950. He was a defensive end with the Eagles, switched to receiver and then came to the Bombers.
Grant is a four-time West all-star as a receiver  (the CFL didn’t start selecting a league all-star team until 1962). He also still holds the league record for most interceptions in a playoff game, with five, set against Saskatchewan in 1953.
He remains the Bombers franchise all-time leader in wins with 102 and posted a .644 winning percentage (102-56-2).