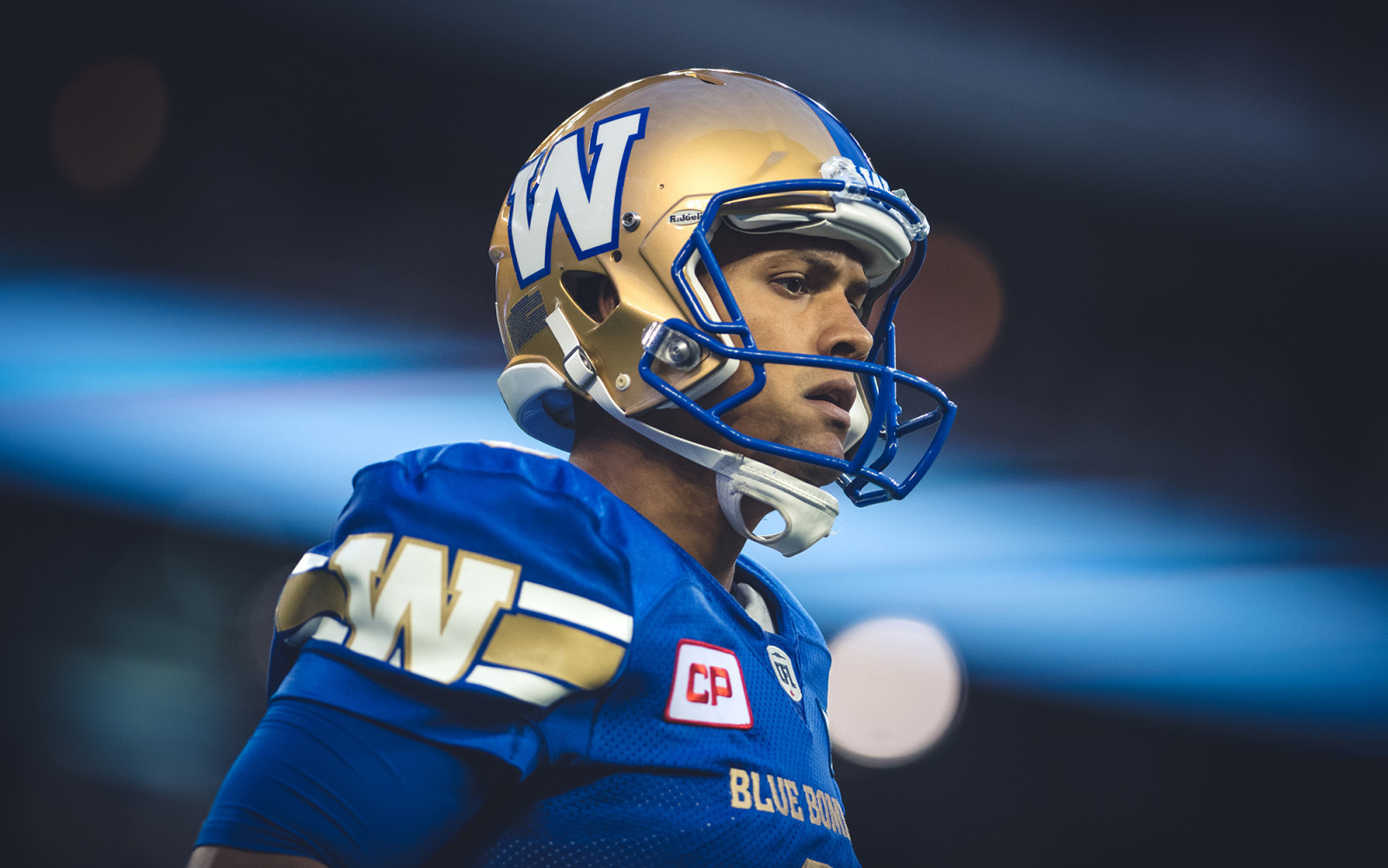 Justin Medlock (9) of the Winnipeg Blue Bombers during the game against the Montreal Alouettes at Investors Group Field in Winnipeg, MB. on Friday, June 24, 2016. (Photo: Johany Jutras)

TORONTO – He’s smashed records and tied others. He’s won games at the final horn and, as Winnipeg Blue Bombers fans are still painfully aware, saw his last attempt of the 2016 season fall short.

Justin Medlock’s profession has always been about the black and white of hit/miss. That’s his gig. The hits go through the uprights; the misses do not.

And so when the Bombers placekicker takes to the stage at the Art Gallery of Ontario Thursday night as the heavily-favoured winner of the Canadian Football League’s Most Outstanding Special Teams Player Award – and no offence to the other finalist, Brandon Banks of the Hamilton Tiger-Cats, but this should be a slam dunk – he’ll admittedly be thinking about all the hits and misses along the way.

The moment is a celebration of all his successes, of course, including a record-breaking 60 field goals this season. But it’s also about a road travelled to get here.

And man, has Justin Medlock encountered some potholes along the way…

“I think about all the times I’ve been released,” began Medlock earlier this week.

“Eight times I’ve been released and I’ve changed teams 11 times. I’ve been traded once. I’ve been picked up off the waiver wire once… actually, twice, now that I think about it.”

“There’s been a lot of failures and so the possibility of winning something like this is a good thing to see that your hard work is paying off. I’ll think about my mom helping me through some tough times as a kid. And it hasn’t been easy on my wife to give her a call and say, ‘Hey, I’ve been released’ or ‘We’re on to another team.’ There was a year in there, 2010, where I must have been released five times. I’m trying to think… Washington, Omaha, Detroit, Toronto… it’s at least four times and then traded in the offseason. That’s pretty tough to go through.”

Justin Medlock (9) of the Winnipeg Blue Bombers during the game against the Edmonton Eskimos at Investors Group Field in Winnipeg, MB. Thursday, July 14, 2016. (Photo: Johany Jutras)

Justin Medlock has always loved to kick, even if it took a while for him to find football. Or vice-versa.

He was a soccer/baseball/basketball kid growing up in Fremont, California, near San Francisco. He didn’t decide to give football a shot until his sophomore high school year, but was initially given the thumbs down because his coaches wanted him to kick and play another position. Medlock wanted to do his kicking thing at practice, and then have the freedom to head out to soccer.

An accord was reached and, in two years of kicking for the Mission San Jose Warriors, he had earned enough national recognition to have scholarship offers from Oregon, North Carolina and UCLA.

But amid all that success also came heartache – when Medlock was 16 his father Robert passed away after a battle with cancer.

“He first had cancer when I was eight, battled it and then it came back when I was probably about 15,” said Medlock. “It was hard. I was just starting football when he passed away. He got to see me play one high school football game and that was it.”

With his older sister Tanisha (now Pelletier) nine years his senior – she is now a doctor at the California Pacific Medical Center in San Francisco – that left Medlock and his mother, now retired from the IRS, to try and cope.

But as Medlock would learn in the years to come, he’s not just a fighter; he’s got a resiliency and mental toughness in his very core.

Justin Medlock (9) of the Winnipeg Blue Bombers during the game against the Edmonton Eskimos at Investors Group Field in Winnipeg, MB. Thursday, July 14, 2016. (Photo: Johany Jutras)

Medlock settled on playing for the Bruins – he was a huge North Carolina fan but UCLA was the closest campus to home – and proceeded to crush records at university while drawing more national attention. Medlock set a Bruins record with six field goals of 50 yards or more from 2003-06 and hit on 70 of his 80 tries during his days there. In his senior season, he was a consensus first team All-American.

Those numbers led him to being selected by the Kansas City Chiefs in the fifth round, 160th overall, in the 2007 NFL Draft. Medlock was just three of six in the preseason, however, and was released after going one for two in the Chiefs opener against the Houston Texans.

And that’s when his football odyssey began to take him all over the North American football map.

“I was kinda young, didn’t really know what was going on… I don’t know if I was as good as I should have been at the time.”

“Once you get to the pros it’s a big mental jump and that was a huge jump for me,” said Medlock of his stint with the Chiefs.

Medlock then went from – inhale here – Kansas City to the St. Louis Rams to the Toronto Argonauts to the Washington Redskins to the Detroit Lions to the Omaha Nighthawks of the UFL, back to the Argonauts to the Edmonton Eskimos, then traded to the Tiger-Cats before signing with the Carolina Panthers to the Oakland Raiders, back to the Ticats before landing with the Bombers as a free agent last February.

The signing was lauded in Winnipeg – where the club had suffered through an inconsistent season from Lirim Hajrullahu – but panned by others across the league. Too much $$$ spent on a kicker, the reasoning went.

Well, as it turns out, Medlock was worth every nickel for an emerging Bombers squad in 2016 that still had very little room for error. It needed a finisher like Medlock, who tied a Bomber record with a 58-yarder in his first game, hit seven field goals in two games and six in two others, and not only was the CFL’s leading scorer, but also smashed a club record for points in a campaign.

“People asked me a lot this year if this was my best season,” said Medlock. “It’s hard to say, because in 2015 I had so many big kicks that could have ended the game really quick if I didn’t make them. Sometimes that means more than what the stats say. I mean, the 37-yarder I hit in the Grey Cup to keep the game going (it pulled Hamilton to within 20-16 with 2:05 left) was probably the biggest because if I don’t make that, the season is over right there.

“But I’ll say this: you’re only going to get better with age. I kinda started off a little rough this year but at the end of the year I hit a good spot where I got into a really good groove and I felt back to normal. It takes time and I feel like next year will be a lot better.

“My fourth quarter has gotten a lot better with age because my mental game has become stronger.”

It was back in his college days when Medlock met Hannah Jun, and the pair got married in 2014. Golf fans may recognize Hannah’s name – she was on the LPGA tour after Justin spent a summer working as her caddy on the Symetra Tour, the feeder league to the bigs.

But Hannah was diagnosed with lupus a couple of years ago and ultimately quit the tour to fight the chronic inflammatory disease. Given a clean bill of health this past year, the couple is now expecting their first child.

Dealing with that, and all the adversity which preceded it, has hardened Medlock’s mental toughness. He’s especially proud of having gotten a second shot at the NFL with the Panthers, five years after his stint with the Chiefs.

Granted there are days – like last Sunday when NFL kickers combined to miss a record 12 converts – when Medlock wonders ‘what if?’ But he’s content with where he is now and where he is in life.

“I know a lot of guys in the NFL and I’ve kicked with a lot of them. I know I can kick at that level. I made it. I played there,” said Medlock. “It’s just about opportunity. I’m a lefty and it’s hard for teams to try and change their whole operation in the middle of a season and try to work around some young rookie.

“Obviously, it frustrates me. It’s crazy how it works, but I don’t regret it. I gave it my best. You go through a lot of situations… you fail and you succeed in different situations and learn from that. For example, I missed a big kick in the States in 2012 and I thought that was a big lesson learned. That’s when my career jumped in a positive direction. There could be an argument made that that could have been my last kick. I got a second opportunity.

“Now it seems like whenever I’m inside range I’ve been really dialed in and able to come through.”

Watching Justin Medlock at any Bomber practice this past season is a bit like peering over the shoulder of a master craftsman. He spent hours working with long snapper Chad Rempel and also with holders Weston Dressler and Matt Nichols on the art of holding.

And yes, all of this is like art to Medlock. It’s his craft and he will not settle. Get this: Even after all he’s done this season, he still figures there’s more to learn, more room for improvement.

“I just think in order to be a true pro you’ve got to take your craft seriously,” he said. “I’m very knowledgeable with the kicking game and special teams in general. Just the knowledge of kicking helps me… some people just think about the kicking and it comes down to everybody, from the snap to the hold, but those guys have really helped me.

“(Thursday night) will be exciting, I hope. It’s funny, one of the first things I saw when I stepped into (Investors Group Field) was a list of Bombers who have been named Special Teams Player of the Year (Albert Johnson III in 2000, Charles Roberts in 2001, Keith Stokes in 2004) I was like, ‘I’m going to get on that list.’ Hopefully it’s this year. That would be pretty cool, especially to have guys like Chad Rempel and Matt Nichols and Weston Dressler to have been a part of it and for the organization, too.

“But,” Medlock added, “awards are nice and yet I’ve been in the CFL for six years and have zero Grey Cups. That’s my No. 1 goal, for sure.”