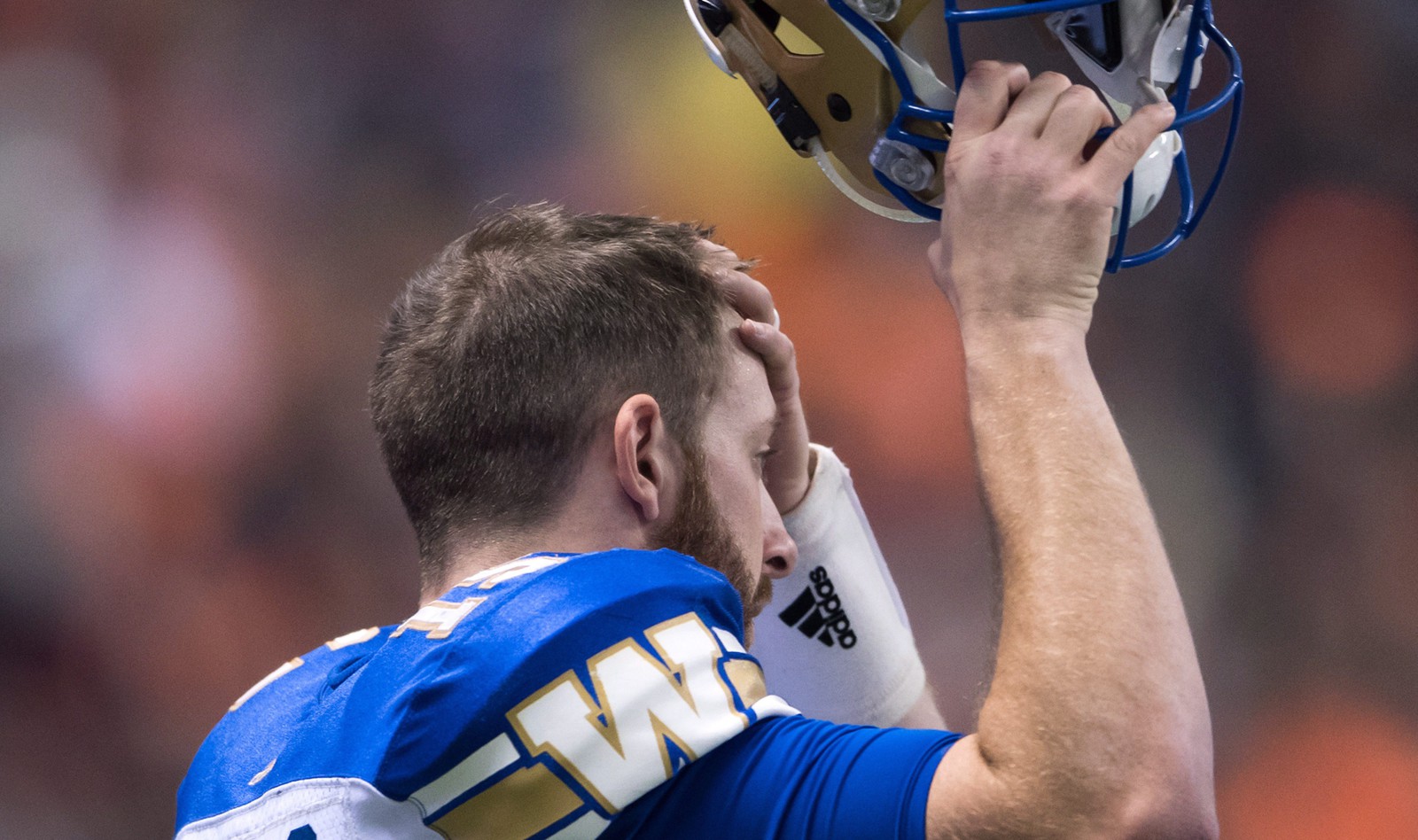 Winnipeg Blue Bombers' quarterback Matt Nichols takes off his helmet as he stands on the sideline during second half western semifinal CFL football action against the B.C. Lions in Vancouver, B.C., on Sunday November 13, 2016. THE CANADIAN PRESS/Darryl Dyck

VANCOUVER – This wasn’t in the script the Winnipeg Blue Bombers had written up beforehand. Not this. Not with this abrupt and season-ending sudden stop, with the scoreboard at zeroes and the Bombers on the wrong end of it.

The story of Sunday’s West Semi-FInal started so promisingly, what with the Bombers doing almost everything right for 45 minutes and taking a nine-point lead into the final quarter before falling 32-31 to the B.C. Lions that brings to a close the 2016 campaign.

The afternoon ended in heartache, it ended in tears and it ended with a decision that is going to dominate sporting discussions all over Winnipeg all offseason.

And now the Bombers will have months to reflect on Sunday’s loss which extends the franchise’s championship drought for another year and to 26 in total.

The Lions, meanwhile, advance to next weekend’s West Final in Calgary against the Stampeders.

“We’re disappointed, we’re sad… everything just feels bad right now,” said Bombers defensive end Jamaal Westerman in a morose locker room afterward. “Guys played hard, but everybody feels like they were the one to let us down. We tip our hats to B.C. They’re a good team. It was like our two other games against them this year.

“It came down to the last drive, the last play, the last second… this time we just weren’t able to get the ‘W.”

The Bombers led for 58 minutes and 54 seconds on Sunday, before Lions quarterback Jonathon Jennings scored on a spectacular nine-yard run to put the Lions ahead 32-31. The two-point convert failed and the Bombers then took possession at their own 37-yard line with 58 seconds remaining.

Matt Nichols, who was superb all day, then connected twice with Ryan Smith for 21 yards but, facing a third and four from the B.C. 53-yard line with 36 seconds remaining, head coach Mike O’Shea opted to have Justin Medlock attempt a 61-yard field goal rather than gamble to move the chains.

“I just think it gives us an opportunity. I go back to being down on the goal line several games ago, down by 10 and taking a field goal there to give us the opportunity,” said O’Shea. “The kick gets off… it gives us a chance, right?

“I realize the offence would give us an opportunity, too, but there’s the finality of a third-down play compared to kicking a ball.”

Medlock, who doesn’t kick off a tee, used one on the last try in an effort to get more elevation, reasoning that had hit a 73 yarder two years ago while using a tee.

“I didn’t think I would have got it there, so I just grabbed a tee and tried to hit a driver,” said Medlock. “I just hit like a pop fly. I could have drove it a lot better, but I just hit really high up on it. It’s my mistake. I should have practiced it.

“I felt like I could hit it. You only get one attempt at it. I’m sure if I go out there and attempt three of them I’d probably make one of them. But you only get one.”

The Bombers had so much going right early in the game, building a 25-6 lead with 2:18 left in the first half by forcing turnovers and using a balanced attack that included two touchdowns by Ryan Smith and a TD run by Andrew Harris on the club’s first possession.

But the Lions continued to punch back, getting a score from Bryan Burnham on a pass from Jennings and  grinding the ball along the ground as Jeremiah Johnson scored with 1:07 left in the first half on a 40-yard run. Jennings found more magic in the second half, running for two TDs and passing for another.

“You’re going against a high-powered offence like that, you know you’re going to have to score points to win,” said Nichols. “ A number in mind for me was 38, the way (B.C.) has put up points this year, and we didn’t reach that goal. Credit to them, they did a good job coming back and it’s not easy coming back from a two-touchdown deficit at halftime and we didn’t do enough to finish.”

Asked about the decision to try the long-bomb field goal vs. moving closer on a third-and-four gamble, Nichols said:

“We have all the trust in the world in Coach O’Shea to make those decisions. That was the decision that was made and I’ve watched Justin make that field goal a ton. It is what it is. We just didn’t make enough plays to win. It wasn’t one thing that lost us this game, it was a combination of not making plays here and there and them making the plays when they needed to.”

The Bombers bend-but-don’t break defence limited the Lions to just 12 points in the first half, but B.C. was able to find some traction offensively by pounding the football. By game’s end they had amassed 503 yards net office, including a whopping 193 along the ground.

Still, the game was just waiting for somebody in Bomber colours to make that critical play in a critical moment. And while the club had relied on Medlock all season, hoping he could crush a 61-yarder in the dying seconds is a monumental ask.

The Bombers rallied from a 1-4 start to finish 11-7 and make their first postseason appearance since 2011. But that was small consolation in the locker room afterwards, but was what the team was clinging to in defeat.

“We had a special group of men, we just didn’t have the special outcome that we wanted,” said Westerman. “Right now it feels like, ‘Ahh, s—t, it’s all for naught.’ But when you look back at it, sometimes it’s about the journey. I’m proud of the men in here, proud of what we were able to accomplish.”

“For me it’s been an emotional year as far as coming back home and the adversity we faced early on and coming back like we did,” added Bomber running back Andrew Harris. “But, all said and done I’m really proud of this team and this organization and what we’ve accomplished and where we’re headed.

“I’m optimistic of where we’re going to be next year. Guys in the locker room are great guys and we fight and we’re definitely going to forget this next year and that’s going to mean a lot.”

193: Rushing yards by the Lions – including a 7.1-yards per carry average – for three touchdowns.

7-3: The Lions record against the Bombers in the playoffs, including the Grey Cup.

20-6: B.C. out-scored the Bombers by two touchdowns in the second half.