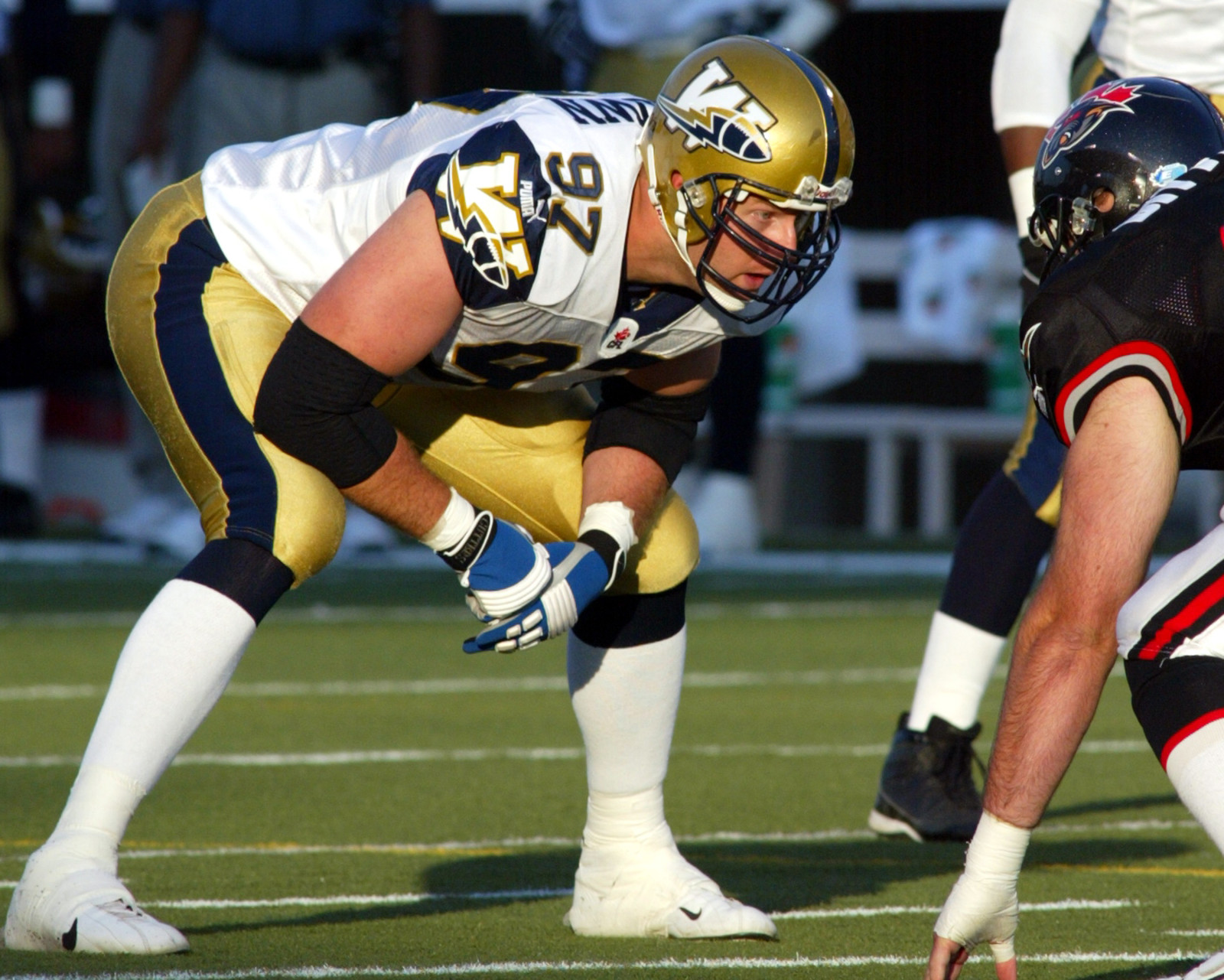 The first thing anyone in football noticed about Doug Brown was always the obvious: his 6-foot-8 frame and his long arms forever had coaches drooling about his potential.

So yes, genetics gave the big man a heckuva head start on his hall of fame career.

But what wasn’t visible for many summers and falls, and certainly through the first seven-eight years of his professional playing days – was the driving force behind all that success. Teammates, coaches, fans and trainers would all attest his work ethic was unrivaled, as was his dedication to his craft and forever staying at or near the top of his profession.

And yet what drove him the most, he can admit all these years later, was something else: a deep-rooted insecurity.

“It’s tough to reveal things like this,” began Brown, announced today as the final addition to the Ring of Honour this season.

“(Former Bomber GM) Brendan Taman once said of me in the press, and I was horrified, that I was an ‘insecure’ player in that I was always worried about someone being better or being beaten out.”

“It’s hard when someone pegs you like that, but he was right. I came to Winnipeg from the NFL with expectations that I should be a good player and I should be dominant. Then it was whether I could sustain it.

“My concern at first was whether I was going to be a flash in the pan, then when I was making more money it was whether I was worth what I was making. It was always something that put a chip on my shoulder – that I had to prove something to everyone and to myself. Even at the end of my career, I was driven by not being one of those guys who people said wasn’t as good as I used to be or my game was dropping off substantially.

“So there was always this underlying insecurity when I played, but it helped fuel me.”

Brown was a first round draft pick of the Calgary Stampeders in 1997 after a solid college career at Simon Fraser University. But he turned down an offer from the Stamps – much to the chagrin of then-Stamps boss Wally Buono – to pursue a free-agent tryout with the Buffalo Bills.

And it was here where Brown’s indoctrination into pro football began immediately.

The Bills of 1997 were at the end of their AFC reign, their four Super Bowl appearances in the rear-view mirror. It was the last year on the sidelines for legendary coach Marv Levy and stars like Bruce Smith, Andre Reed and Thurman Thomas were on the back nine of their hall of fame careers.

Brown was just some big dude from Canada then, not drafted by the Bills and a long shot. But he never took a rep off at practice and spent that season (and the next two with Washington) doing everything he could to make the game his career.

And again, fear of failure can be a powerful motivator.

“My first years in pro football, I was always looking over my shoulder because I was paranoid and insecure,” said Brown. “My first goal in the NFL was simply not to be the first guy cut because I didn’t want to be an embarrassment to myself, to my family, to my school. That set the basis for me.

“But the only time I was ever cut in football was in the NFL and it traumatized me. And then from then on it didn’t matter if I won a bunch of individual awards in the CFL, if I didn’t do that again the next year then I was getting worse and not living up to people’s expectations.”

“I never took anything for granted. I never thought I was ever that good, that I always had something to prove to myself, my teammates, the fans and everyone else.”

Brown broke his foot and missed the entire 2000 season with Washington and when Norv Turner was fired and replaced by Marty Schottenheimer, his future in the NFL was at a crossroads.

That’s when Taman made one of the greatest trades in Bomber history, sending a first-round and third-round pick to Calgary. The first rounder turned out to be Jon Oosterhuis who, ironically, was cut by the Stamps and scooped up by the Bombers and became a solid defensive tackle and one of Brown’s best friends; the third rounder was Mike Labinjo.

Brown made an instant impact with the Bombers, as he was not only named a CFL All-Star in 2001 – the first of his seven appearances on that squad – but was named the league’s Most Outstanding Canadian. He was a powerful force in the trenches and followed up his first-year success by being named to the CFL All-Star team again in 2002.

And then the honours tapered off as Brown and the all-star honours went cold.

It’s here where Brown’s insecurity, coupled with his work ethic and the arrival of defensive line coach Richard Harris, combined to jumpstart his career again. Down south he had been in a constant battle to add weight to fit the NFL defensive tackle prototype. An example: both Buffalo and Washington wanted him to bulk up to 330 pounds and, to help inch closer to that goal, he would slip two five-pound weights into the sides of his compression shorts when he weighed in daily.

But the longer, wider CFL field – and the smaller rosters – meant that Brown needed to combine power with speed and endurance. He completely changed his workout regime, courtesy of Jeff Fisher at Elite Performance, to improve his core strength and his conditioning. He would work out at 6:00 a.m. before practice during the season and then, after his time on the football field, would train even more with Oosterhuis.

It all worked as Brown, then 31, entered a stretch where he returned to prominence and dominance as he was named to the CFL All-Star team the next five years and in 2011, his last in the game, he was a divisional all-star.

There are aspects of the game he misses – all ex-players speak of how irreplaceable the camaraderie of the locker room is – but Brown, not surprisingly, also provides a deeper take.

“I loved how you had an exam once a week and it was on the football field,” he explained. “It was up to you how you were going to do on that exam. I couldn’t control or predict whether we were going to win or not, but I could control with a great deal of certainty how I was going to play based on how I prepared. That’s what I loved.

“There are so many jobs in life where there are politics, things outside of your control. There’s a degree of that in football, too, but it is the most direct input-output profession I’ve ever seen.”

Brown’s story with the Bombers and his association with this town is, of course, about more than just football. Born and raised in B.C., he spent the first four-five years of his days in Winnipeg admittedly taking the first plane back to Sterling, Virginia after the CFL season ended. He had a green card and was making decent coin there in the winter and saw no reason to spend the frigid winters here.

But this town and this province can get into your blood. And as Brown’s profile grew, so did his opportunities outside of the game. A deep-thinker with a gift for the gab, Brown landed a radio show on CJOB – ‘Doug Brown’s Spin Zone’ – and, to this day, continues to write a weekly column for The Winnipeg Free Press.

He also now serves as Bob Irving’s analyst on CJOB and has a full-time job working for Zimmer Biomet in the medical device industry.

And he has no plans to leave.

“I had no ties, no attachment to here when I first came in 2001,” said Brown. “And if I was to look back to 1997 when I started pro football and tell myself then that I was going to end up living in Winnipeg, Manitoba for the rest of my life, my eyes probably would have popped out of my head.

“Even in the early going here there was no desire to make this a lifelong association. I saw it as a great place to play football, but I didn’t have any designs on being here full time. But you come to appreciate a place if you give it a chance and spend some time there.

“It’s funny,” Brown continued, “but I owe a lot of my appreciation for Manitoba to (former Bomber defensive end) Tom Canada. He got me going to West Hawk Lake… he was the ultimate adventurer outdoor guy and he really sparked my appreciation for what this province has to offer.

“All I can say now after all these years is this place can really grow on you.”