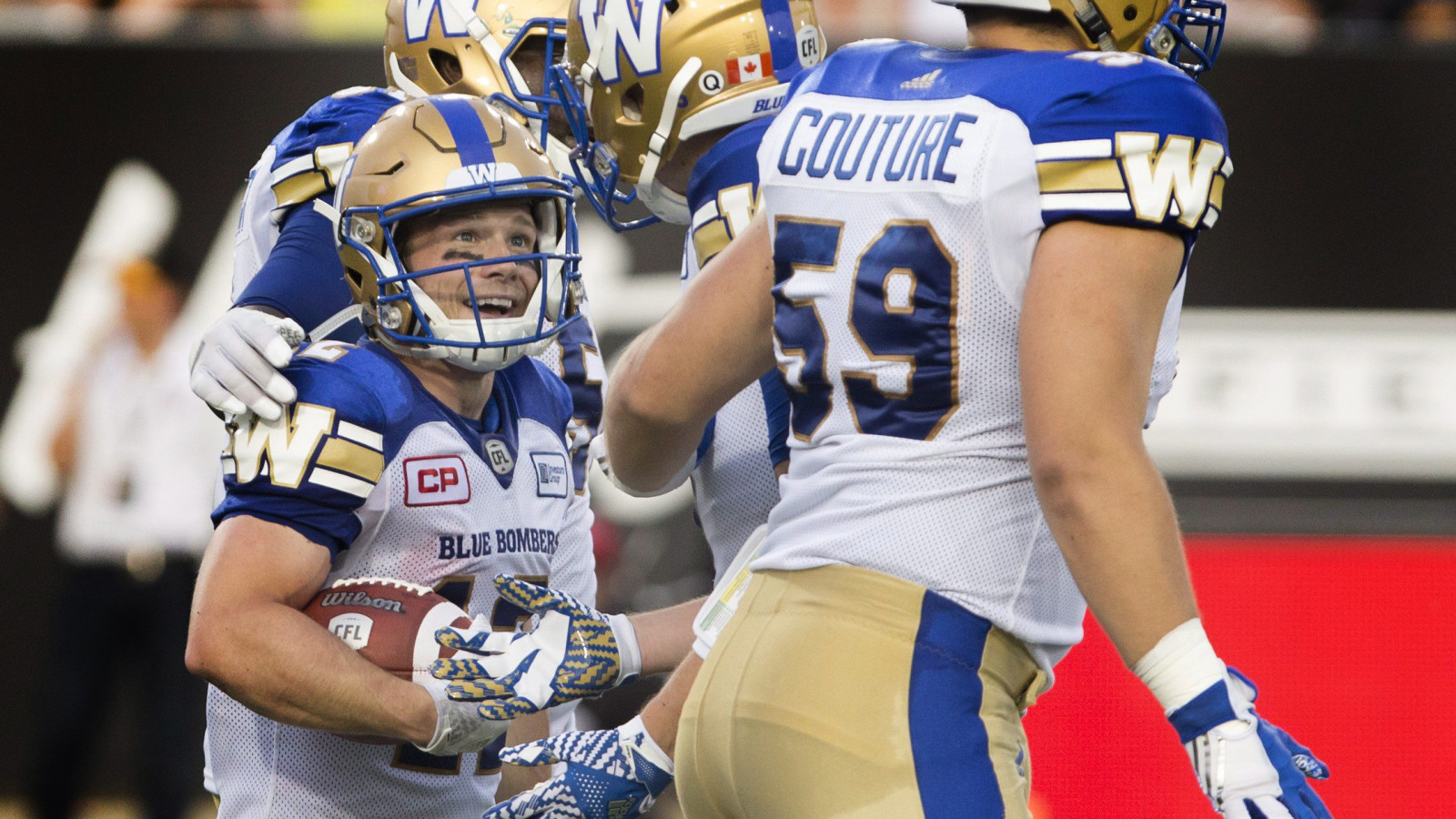 Winnipeg Blue Bombers wide receiver Ryan Smith (12) is congratulated by teammates after his touchdown during first half CFL football action against the Hamilton Tiger Cats, in Hamilton, Ont., on Thursday, July 7, 2016. THE CANADIAN PRESS/Peter Power

HAMILTON – Maurice Leggett stepped in front of a row of reporters, the sweat dripping from his face. And it was a face dominated by a size-large grin.

“Every answer,” began the Winnipeg Blue Bombers linebacker, “is biscuits and gravy.”

That might just perfectly sum up the vibe around the Bombers Thursday night as a squad desperate for a win – heck, a franchise and its fan base absolutely craving a ‘W’ – edged the Hamilton Tiger-Cats 28-24 in front of 23,846 for its first win of the 2016 season.

Now, it didn’t come easy. In fact, it had a certain jamming-a-square-peg-into-a-round-hole feel to it as the Bombers made just enough mistakes to keep a game they dominated for long stretches interesting until the very last possession.

But there are no points for artistic merit in football. And when a team goes 0-2 to open the season and the angry mob is already collecting the pointy sticks and torches, it could be said this victory was positively critical in terms of at least changing the narrative.

At least for one week.

“We got the W, that’s all that matters,” said Leggett with a shrug.

“We’re not there yet, but we showed a lot of high points and made more plays than mistakes.”

“We’re just coming along. We’re knocking down that wall. Everyone has their jackhammers and are trying to drill that hole in. We’ve got that one little hole and now we’ve just got to beat it down and make the hole bigger.

“We’re starting to believe in each other, trust in each other, knowing that the guy next to you is going to do his job. We’re not worried about doing someone else’s job. We’re just taking care of our job first and that’s what we did.”

The night began inauspiciously enough, as a special-teams screw-up turned what would have been a 46-yard Justin Medlock field goal attempt into a 51 yarder. And when Brandon Banks returned Medlock’s miss 120 yards for the game’s first touchdown, it definitely left a ‘here-we-go-again’ moan across Bomber nation.

Except the Bombers got up off the mat from the early knockdown and started firing shots back at the Ticats.

Medlock hit two chip shots and then Leggett stepped in front of a Jeremiah Masoli pass and returned it 51 yards for a touchdown, as the Bombers recovered from their wobbly start. Leggett’s pick-six was part of a valiant defensive effort by the Bombers that saw them force six turnovers – Leggett had two picks, while Julian Posey, Ian Wild, Euclid Cummings and Adrian Hubbard all had fumble recoveries.

Hubbard’s recovery came after he sacked Masoli, with 14 seconds left and the Ticats at the Bomber 22-yard line.

“Coach made the call and we just executed it,” said Hubbard. “They were showing us different looks all night long and I just told myself, ‘I’m not going to stop with 14 seconds left. I’m not going to do it.’”

Bomber QB Drew Willy completed 32 of 42 passes (76.2 per cent) for 279 yards and one TD strike to Ryan Smith. That pass, in which Smith latched onto a pass seemingly without even looking or using his hands, might be one of the strangest scores in the CFL in a long time.

“I kinda caught it out of the corner of my eye,” said Smith. “It hit my thigh and I just tried to scoop it and just tried to get in the end zone. It was one of the crazier plays I’ve seen. It’s insane. Drew put the ball right where it needed to be… sometimes you get lucky.

“Hard work equals luck,” added Smith, nodding in the direction of Bomber veteran long snapper Chad Rempel. “And that’s a quote from the Chad Rempel himself.”

The Bombers took a 22-10 lead into the intermission, but when the Ticats took a Quincy McDuffie fumble on the opening kickoff of the second half and turned it into a TD, the team was faced with another critical moment.

“The result certainly helps, but it’s also the way we got the result,” said Bomber head coach Mike O’Shea. “We kept on grinding. We faced some adversity really early. We faced some adversity right off the bat in the second half. But it didn’t faze them at all. I didn’t look around and think that there was anybody hanging their head. It was ‘How are we going to get this back? How are we going to make this work?’

“They showed some resiliency and some professionalism in terms of their attitude and mindset.”

“It’s always good to get a win here,” said Willy. “It’s a tough place to play and their record has been very good here. That’s a well-coached, great team with a bunch of good players. I’m definitely happy with the win. We need to take this momentum and keep moving with it.

“We’ve had the confidence. Obviously, the first couple of games didn’t go as we wanted but that can happen with the new offence. But we’ve got a lot of fighters in there, a lot of good personalities, a lot of guys that want to do the right thing. We have a very poised team as long as we keep an even head.”

Now the question is what does this kind of result do for a Bomber dressing room that had been forced to deal with a lot of pointed questions on some touchy subjects through the first two weeks.

“You get that first win, it’s big,” said Smith. “You get that taste of it and all that preparation, it doesn’t feel like it’s going to waste. We’ve got to continue keep getting better and working our butts off. But that’s a big-time deal. Now we’ve got to keep looking forward.”

9-0/2-6: The Ticats opened Tim Hortons Field on Sept. 1, 2014 and then reeled off nine straight victories to christen the building. Since then they are 2-6.

“I’m sure the defence will look at the film and want a few plays back. But to force six turnovers? What a time to come alive. How about Moe Leggett? He was just Johnny-on-the-spot there. Fantastic.” – Bombers coach Mike O’Shea.