What you didn’t know about Chris Walby 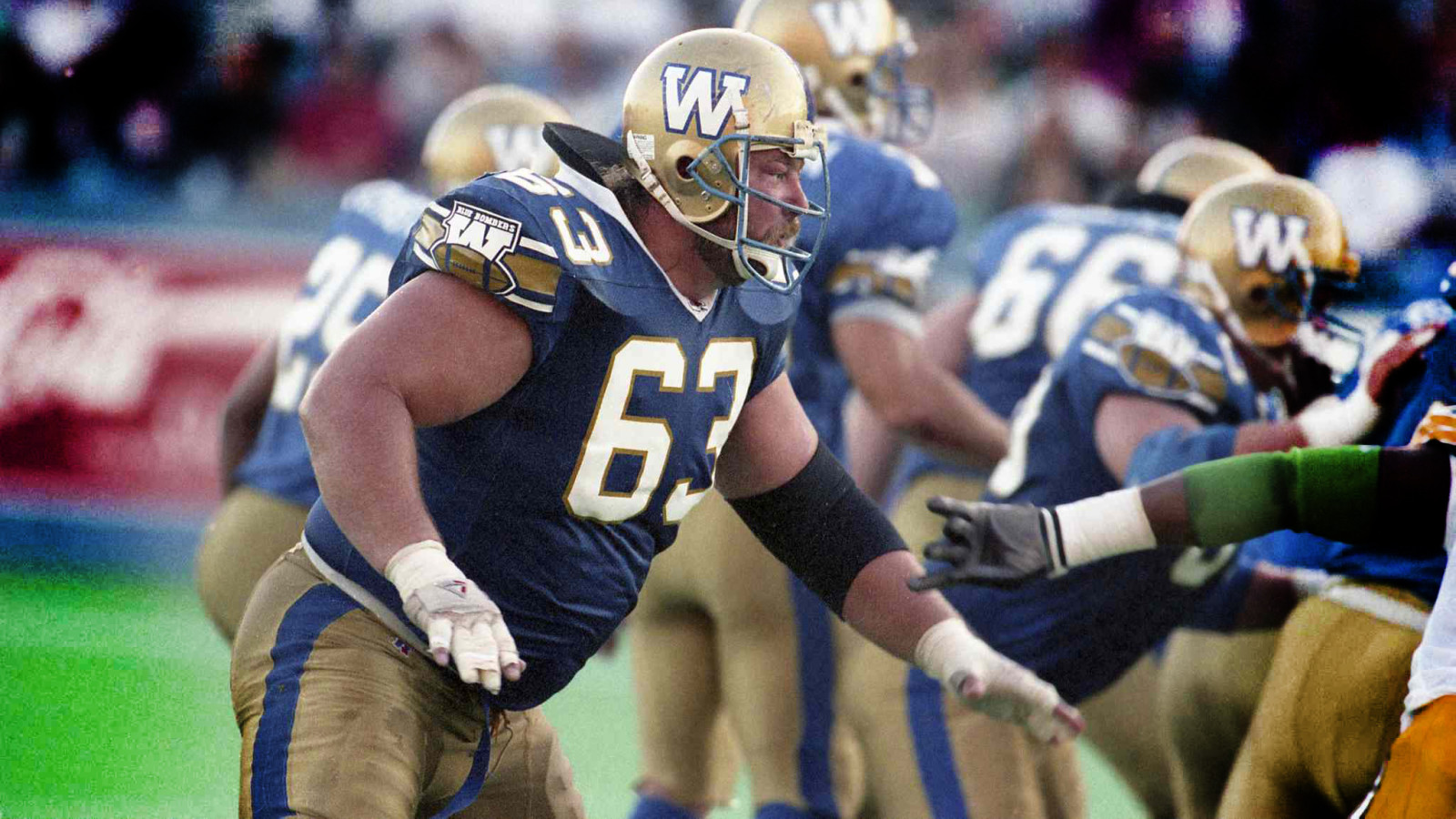 What you didn’t know about Chris Walby

He was a big kid from Polson Avenue in the North End – a really, really big kid – with sporting dreams just like so many others in the neighbourhood.

“I never played football until Grade 12 at St. John’s High School,” began Walby, the first player to have his name included in the Winnipeg Blue Bombers’ new Ring of Honour at Investors Group Field. “It was always hockey, hockey, hockey.

“But a buddy of mine was playing for the Tigers and I tagged along with him to tryouts. Graham Kinley was the head football coach then. And when I see him now we laugh because he must have been thinking, ‘How can I get rid of this kid?’ In all honesty, even doing drills like monkey rolls – where we had to jump over each other – I would screw that up. Nobody wanted to be in my line. I was just a gangly kid, about 180 pounds and about 6-6.”

Football fans know how this story turns out: Walby is a member of both the Bomber and Canadian Football Hall of Fame and arguably the greatest offensive lineman to ever play the three-down game. He was a nine-time CFL All-Star, a 10-time Divisional All-Star, and was twice voted the league’s Most Outstanding Offensive Lineman.

But if not for an unusual confluence of events, the big man might not have ever played a down of football, let alone carve out a hall of fame career that has made him a sporting saint in this town.

Walby played 52 games with the West Kildonan/Kildonan North Stars of the Manitoba Junior Hockey League over the 1975-76 and ’76-77 seasons, scoring four goals and adding nine assists. And there’s this: he also racked up 275 penalty minutes.

This was back in the days of the Philadelphia Flyers and the ‘Broad Street Bullies’ and as a then 6-6 behemoth, let’s just say Walby wasn’t out there to dangle and deke.

Near the end of the 1977 season, he went at it with Harvey Takvam, a tough guy brought up by the Dauphin Kings, in the pregame warm-up. All heck broke loose, the cops were called, and Walby and teammate Jimmy Flett were thrown into the back of a police cruiser and taken down to the station to be booked.

There was a push then, just as now, to get some of the violence out of hockey, and the pregame stuff in particular. And so Walby was actually involved in a two-day trial.

“Kenny Sutherland, a teammate and assistant coach, was on the stand talking about fighting,” Walby recalled. “He says to the judge, ‘Hey judge, have you ever fought?’ And after the two go back and forth, the judge turns to me and says, ‘Mr. Walby, if you’re basing your credibility on this man as a witness, you are in for a world of hurt.’

“I knew right then this was not going to go the way I thought.”

Walby was charged with assault causing bodily harm and given a two-year conditional sentence. Not long after, Walby turned his attention to football and by the end of his only season with the Tigers, he was starting at defensive end.

And then came another roadblock. He tried out for the Winnipeg Hawkeyes junior team and…

“On a team that didn’t cut guys, they cut me,” Walby said with a chuckle. “I didn’t play that year and just started lifting weights. I said to myself, ‘This is horse crap. I’ve got to get some size.’”

Walby would spend the next two years with the Winnipeg Rods and parlayed that into a scholarship at Dickinson State in North Dakota. And around that time he popped onto the Bombers’ radar screen, too.

“(Then Bombers head coach) Ray Jauch invited me to a Bomber camp before I was even drafted in ’81,” said Walby. “I lasted the two weeks of camp. I was so happy to see it over. I’m going up against offensive linemen like Bob Swift and the old veterans there and they’re just toying with me. It was a boy going against men.

Veteran Winnipeg sportscaster Joe Pascucci detailed how Walby went from a draft pick of the Montreal Alouettes to his hometown Bombers in his bluebombers.com blog.

But there were still a few more career-altering events that pushed him onto the road to greatness. Walby arrived here in 1981 as a defensive lineman and a year later, was moved across the line of scrimmage to right guard. Two years later, he was switched outside to right tackle.

“I got here in 81… Dieter Brock was here. Joe Pop (Poplawski) was here. Leo Ezerins,” said Walby. “I can remember training camp in 1982 and staying in the dorms at the University of Manitoba. Dieter, Butch Norman and Buddy Brown… they’re down on the one floor nobody is staying in and they’ve got mattresses spray painted and set up at the end of the hallway and they’ve got their guns out and are having target practice. I’m like, ‘So this is the big leagues, huh? What, do I have to go out and buy a rifle now?’

“I thanked Ellis Rainsberger, the O-line coach who moved me to offence, because in all honesty I can pretty much guarantee if I had stayed on defence, I would never have had my career. I watched what (long-time friend and defensive tackle) Stan Mikawos went through in the middle when you could chop guys, hold them up… and I wonder, ‘How the hell did he play 15 years?’ I shake my head at that.”

Walby was part of a great run with the Bombers up until his retirement following the 1996 season. Many refer to that era – including three Grey Cup championships and 12 division finals from 1982-94 – as the Bombers’ second ‘Glory Years’, following the four-championships-in-five-year run from 1958-62.

The end came, as it does for so many others, went Walby’s body began to break down.

“My last game was against Montreal in the final regular season game of 1996, a nothing game because our place in the standings had already been decided,” Walby recalled. “I shouldn’t have played that game. My knee was screwed. But Cal (Murphy) came up to me and said, ‘We need you to play.’ So, like an idiot, I go get a shot so I can play and I remember sliding out to block Elfrid Payton and my knee just went. It was like it snapped.

“I worked like crazy that offseason after ’96. Part of me said, ‘It’s 17 years, man. Do you want to keep going?’ It was taking me longer to recover. But I was also struggling with that ‘What else do I know?’ I had my teaching degree, but I didn’t know any other life.”

Murphy was let go that winter by the Bombers, with Jeff Reinebold brought aboard as the new coach. Walby then heard the club was trying to trade for Vic Stevenson to replace him – Stevenson himself called him to say so – and after meeting with the coaches decided it was time to walk away.

He had a teaching degree from Dickinson State and put that to use for one year at Murdoch Mackay Collegiate in their Second Chance Program. A year later, he took a sales job for a pharmaceutical company and worked in that field for 15 years before retiring four years ago.

But it was his quick transition to the broadcast booth, as an analyst for the ‘CFL on CBC’, that really helped in those first few years after his retirement.

“The TV did two things. It was like a Band-Aid for me,” he said.

“My heart was saying, ‘Man, c’mon. You could still be out there.’ And then my body goes, ‘Thank you. You don’t need to do this anymore.’”

“It’s funny, Dave Ritchie called me about three years after I retired asking me if I ever thought about coming back. I wasn’t sure if he was joking.

“I used to have dreams, nightmares I guess, about coming back and getting my ass kicked. And then I’d wake up and realize it was just my wife pounding on me to get up.

“I got out at the right time. I had a helluva career. I’m proud of it and I’m proud I got to play it at home.”