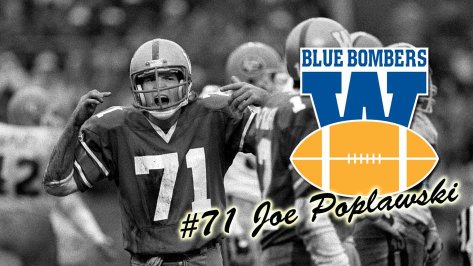 Joe Poplawski was an outstanding athlete at Archbishop O’Leary High School in Edmonton in the early 1970’s.

He excelled in football, track and field, soccer, basketball and hockey. In basketball he was a city all-star at point guard; in track and field, a provincial champion in the 400m, provincial runner-up in the long jump and triple jump;  he played Junior ‘A” hockey with the Edmonton Mets; and at 18 was recruited to play for Canada’s National soccer team.

Not a bad resume.

He was also a pretty fair football player whose nine-year career with the Winnipeg Blue Bombers earned him a ticket to the CFL Hall of Fame.

Following high school and despite overtures from a number of U.S. Colleges with scholarship offers, Poplawski chose to attend The University of Alberta.

“At 18 I thought my best soccer years were behind me and most of the scholarships were for hockey,” says Poplawski. “Also I really didn’t want to leave Edmonton.”

Joe “Pop” as he was nicknamed by a Winnipeg sports writer, went on to play for the Golden Bears as both a wide receiver and placekicker. In 1977 he was named All-Canadian and that same year played for the Canadian university team against the U.S. in the first Can-Am Bowl.

Poplawski was a territorial exemption for the Eskimos but was traded to Winnipeg for Tom Scott prior to the start of the ’78 season. “I remember saying to a friend of mine a few years earlier that if I ever get to the CFL I hope it is with Winnipeg,” says Poplawski, “primarily because of Dieter Brock and the type of offense they had.”

The former Golden Bear had a phenomenal rookie season in Winnipeg as he chalked up 75 receptions for 998 yards and eight touchdowns. For his efforts he was named the CFL’s Most Outstanding Rookie – the first Blue Bomber and first Canadian to receive that honour.

“I was pretty nervous that first game” he says. “But after catching my first pass my confidence grew and I had a pretty decent game. That became a stepping stone for me. Going to the Schenley Awards in Toronto, I was elated. Here I was a 21 year old with guys like Dave Fennell, Dan Kepley, Tony Gabriel.”

By the time he retired in 1986 Poplawski had established himself as one of the finest receivers in Blue Bomber history. He ranks near the top of the list in a number of team all-time records. He is third in franchise history with 8,341 receiving yards (behind Milt Stegall and James Murphy). He is also third with 549 career receptions and tied for third with most 1,000+ yard receiving seasons with three.

He is eighth on the all-time Bomber scoring list with 357 points.

Five times he was the West’s nominee for Most Outstanding Canadian and twice he won the award (1981 and ’86). Poplawski was a five-time CFL all-star including his inaugural season.

Three times he surpassed the 1,000 yard mark for receiving in a season and twice fell just short as he tallied 998 yards.

Poplawski was also a back-up kicker and again displayed his versatility when he filled in for an injured Trevor Kennerd his final season. He made eight field goals in ten attempts, including one from 45 yards out.

Poplawski failed to get to the Grey Cup in the 70’s and the Bombers lost in his only playoff game against Calgary in the West semi-final in by a score of 38-4 in 1978.
“We were beat up pretty bad,” Poplawski recalls. “Dieter was hurt and Harry Knight, the back-up had an arm injury and couldn’t throw. We tried to run the ball and we weren’t very successful.” The Bomber receiver got some redemption when he won a Grey Cup in 1984 when Winnipeg beat Hamilton 47-17.”Maybe the disappointment in the 70’s made the taste from the Cup that much sweeter,” he says.

In 2005 Poplawski was named one of the 20 greatest Blue Bombers of all time. In 1998 he was inducted in to the CFL Hall of Fame. One of his fellow inductees that year was Tom Scott – the player he had been traded for to start his CFL career 20 years earlier.
“The Hall of Fame was pretty special,” says Poplawski. “To celebrate it with family, friends, former teammates, the media, it was the icing on the cake.”

Today the 52 year-old Poplawski lives in Winnipeg with his wife and three sons – all accomplished athletes. He is a vice-president with Ranger Insurance and past president of the Blue Bomber Alumni Association. He is involved in numerous community alumni events as well as Childfind Manitoba, the Kidney Foundation and recently completed a six year term on the Bombers Board of Directors. An accomplished golfer (“I guess an 8-10 handicap,” he says), Poplawski has been an avid Blue Bomber season ticket holder since his retirement from football and rarely misses a game.

”I still appreciate what the players are going through,” says the former Bomber star. “The heart still pounds a little bit harder on game day as we approach the stadium. I am still a big fan and like to keep involved.”

“Playing in the CFL was a dream come true,” says the man they called Joe “Pop”. “Just making the CFL would have been special but to enjoy the team and individual success was tremendous. Football is part of what I am and will always be part of my life.”