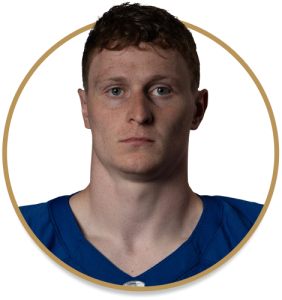 Holm signed with the Blue Bombers on May 23, 2022 after an outstanding college career at the University of North Dakota.
Holm appeared in 47 games, starting 25, during his days with the Fighting Hawks and registered 103 tackles, six interceptions, 33 pass knockdowns with a pair of fumble recoveries and forced fumbles.
He earned All-Missouri Valley Football Conference honours during his redshirt senior season (2020-21) and was named as an honourable mention to the MVFC All-Academic Team.  Holm was named UND’s most-valuable defensive back in his junior season and as a freshman was named to the Big Sky All-Academic Team.
Holm also played rugby in high school and was part of the  USA High School All-American Rugby Team that travelled to France and Belgium in March of 2016.