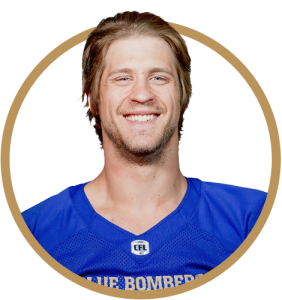 One of the most-popular players among teammates and fans and an aspiring musician and writer, Wolitarsky authored another productive season in 2021. He started all 14 regular-season games last year, plus the Western Final and the 108th Grey Cup victory, finishing the year with 32 receptions for 386 yards and one touchdown.
He added six more catches in the two playoff games, including a Grey Cup performance in which he pulled in four passes for 48 yards – all of them in the club’s fourth-quarter rally.
On January 31, 2022, Wolitarsky signed a two-year contract extension to remain with the club.

Wolitarsky started 17 of 18 games and finished with 33 receptions for 361 yards and four touchdowns while lining up at different spots in the receiving corps. Wolitarsky was effective in the three playoff games as well, with eight receptions for 118 yards in November. His season-best numbers came in a loss in Hamilton in July, in which he finished with five catches for 60 yards.
Signed a two-year contract extension on December 15, 2019.

Wolitarsky enjoyed a sensational break-through season in his second year with the Bombers. He finished the year with 45 receptions for 650 yards and five touchdowns — the 650 yards receiving second on the team to Darvin Adams — in 18 games, all of them starts. Wolitarsky added six receptions for 81 yards and another touchdown in the Bombers two playoff games. In his last 11 games – excluding the regular season finale in Edmonton in which some regulars didn’t dress or had their snaps limited – Wolitarsky had 43 receptions for 574 yards and two TDs.
Wolitarsky’s 650 receiving yards in 2018 were the most by a Bombers Canadian receiver since Gerald Wilcox had 1,024 yards on 69 receptions in 1995.

Selected by the Bombers on June 27, 2017 in one of the CFL’s Supplemental Drafts. The Bombers forfeited a third-round pick in the 2018 CFL Draft to select Wolitarsky, who was added to the practice roster on June 27 and finished the year dressing for five games. Made his CFL debut on October 6th against Hamilton and caught his first career reception in that game, for 15 yards. Wolitarsky was born in California, but his mother is from Montreal. He provided proof of Canadian citizenship to allow him to qualify as a national player.

Finished his career at Minnesota with 130 catches, tied for eighth all-time in Gophers history… His 1,749 yards receiving ranks ninth all-time… As a senior in 2016 he played in all 13 games and set career high in catches (66) and touchdowns (five)… His 66 receptions ranked tied for second all-time as a senior… Named an All-Big Ten Third-Team All Star and was also an Academic All-Big Ten… Also an Academic All-Big Ten in 2014, his sophomore season.