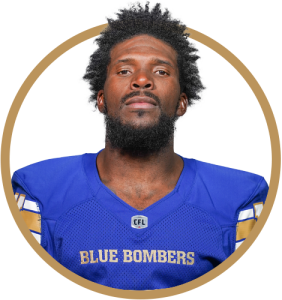 Nichols had a sensational first season in the CFL, earning a starting spot out of training camp and suiting up for 12 regular-season games plus the playoffs en route to being named to the league’s all-star team. Starting at the difficult defensive halfback spot, Nichols registered 43 defensive tackles while adding three interceptions, a sack, a fumble recovery and was also among the league leaders with seven pass knockdowns.
He topped that up with two absolutely massive plays in the club’s Grey Cup win, first deflecting a potential game-winning pass at the goal-line with six seconds left in regulation and then batting another pass in overtime that was then scooped up by Winston Rose into the arms of Kyrie Wilson for a game-ending/championship delivering interception.
On February 14, 2022 Nichols — who was already under contract for the coming season — signed an extension that will keep him in Winnipeg through 2023.

Nichols was leading the XFL with three interceptions in 2020 when the COVID-19 pandemic shut down that league. He had stints with the New Orleans Saints and Miami Dolphins before first signing with the Blue Bombers in February of 2021.
He first turned pro in 2018, signing with the Arizona Cardinals as an undrafted free agent in 2018 and played in two regular-season games before being released at the end of training camp in 2019.

Nichols played collegiately at the University of South Florida, playing in 50 games and starting in his final three seasons. He finishing his career at USF with 175 tackles, 11 interceptions — third most in school history —  24 pass knockdowns, three forced fumbles, one fumble recovery, one sack and 14.5 tackles for loss.