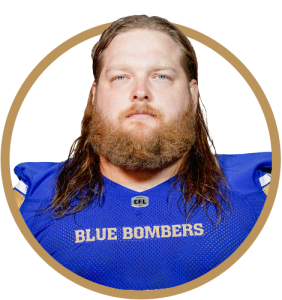 Kolankowski first signed with the Blue Bombers in February of 2020, but had to wait to make his debut with the club following the cancellation of the CFL’s 2020 season due to the pandemic. Kolankowski was added to the club’s practice roster after training camp in 2021 before making his Blue Bombers debut on November 6th in Montreal against the Alouettes.
Kolankowski dressed for two regular-season games in 2021 and then was on the roster for the 108th Grey Cup victory in Hamilton.
He signed a two-year contract extension to remain with the club on January 12, 2022.

Kolankowski was selected by the Toronto Argonauts in the sixth round, 49th overall, of the 2016 CFL Draft. He attended Argos training camp that year, but returned to York University for his final year of eligibility.
He made his CFL debut in 2017, dressing for six regular-season games and both playoff games — including the Argos victory in the 105th Grey Cup. He then played in 16 games in 2018, but was released in training camp last season.
The Bombers signed Kolankowski on February 6, 2020.

Kolankowski spent five years at York University winning the Mike Benevides Lineman of the Year Award in 2015 and the Tom Arnott Award for Hard Work and Character in 2013.