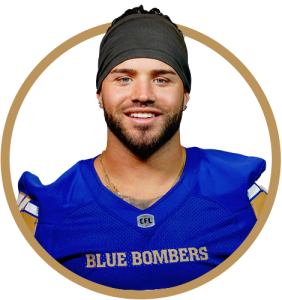 Oliveira settled into his role as the Blue Bombers feature back after the departure of Andrew Harris to Toronto in free agency, starting all 18 regular-season games — plus the Western Final and the 109th Grey Cup — while posting his first 1,000-yard season.

Oliveira finished with 1,001 rushing yards, third best in the CFL behind Calgary’s Ka’Deem Carey (1,088) and B.C.’s James Butler (1,060) while rumbling for four touchdowns. He also pulled in 23 passes for 252 yards and another score.

He then followed that up with a 130-yard rushing effort in the Western Final win over B.C., with that number the 10th-highest rushing total in Blue Bombers playoff history. Oliveira ended the season rushing 15 times for 82 yards in the Grey Cup.

Oliveira posted solid numbers in his first full season with his hometown Blue Bombers, rushing for 429 yards and two touchdowns in 13 games, six of them starts. Those totals placed him second on the club in rushing behind Andrew Harris (623) and ninth overall in the CFL.
His first CFL start came last August 5th in the season-opening win over the Hamilton Tiger-Cats, and it was a memorable one as Oliveira rushed for 126 yards on 22 carries. That was one of two 100-yard efforts for Oliveira, who also replaced an injured Harris in a win over the Edmonton Elks on October 15th and rushed for 105 yards on 16 carries. He scored his first career touchdown a week later in a victory over the B.C. Lions.
On February 7, 2022, Oliveira signed a two-year contract extension to remain with the club.

The Bombers selected Oliveira in the second round, 14th overall, in the 2019 CFL Draft and the Winnipeg product earned a spot on the opening-day roster. Unfortunately, his year came to an end a week later in the Bombers home opener when he suffered a season-ending leg injury. He was back on the field practising at the end of 2019, but did not suit up for any of the team’s playoff games.

Oliveira played 42 games at the University of North Dakota, recording 2,822 rushing yards and 22 touchdowns over four seasons. He earned All-Big-Sky Honours in 2016 and 2017, and in 2018 was a Jon Cornish Award Finalist for the most outstanding Canadian player in collegiate football. His best season came in his final one at UND, when he rushed for 980 yards on 161 carries, with eight touchdowns in just 11 games.