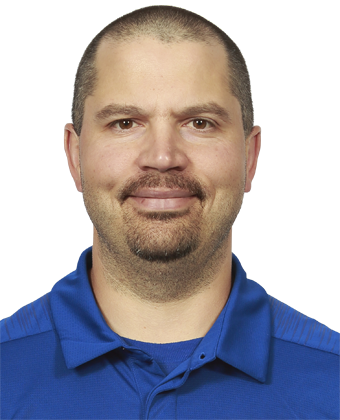 Marty Costello enters his fifth year with the Blue Bombers in 2020 and fourth as the club’s offensive line coach.

Costello continues to earn respect for the work he has done with the Bombers offensive line, widely  considered one of the most-consistent and dominant units across the Canadian Football League.

Over the past three seasons in particular the Bombers offensive line has had had to boast about, as running back Andrew Harris has captured three consecutive CFL rushing titles, while the offence
finished first in scoring in 2018 and second in 2017.

Winnipeg’s O-line lost two starters in the offseason heading into 2019, with centre Matthias Goossen retiring to work with the Delta Police Department and Sukh Chungh leaving in free agency. As well, the club was without Patrick Neufeld for the first half of the season due to injury. Yet, Costello’s crew continued to provide holes for Harris while protecting three different starting quarterbacks in Matt Nichols, Chris Streveler and Zach Collaros. Winnipeg’s 2,663 yards rushing was the most by the club since 1965, when the team rushed for 3,005 yards in a 16-game season.

Winnipeg allowed 36 sacks against in 2018, tied for second fewest in the CFL while the offence was without starting quarterback Matt Nichols for the first three games of the season and Harris rushed for a career-best 1,390 yards.

In 2017, Costello’s offensive line helped propel Andrew Harris to a league-leading 1,035 yards rushing, and allowed the fewest quarterback pressures in the CFL at 71.

Costello first came to Winnipeg in 2016 to serve as assistant offensive line coach to Bob Wylie. Prior to joining Winnipeg, Costello spent two seasons at the University of Wisconsin-Stevens Point as run-game coordinator and offensive line coach. In his first season, the team put up 114.8 rushing yards per game and was third in the conference with 14 rushing touchdowns.