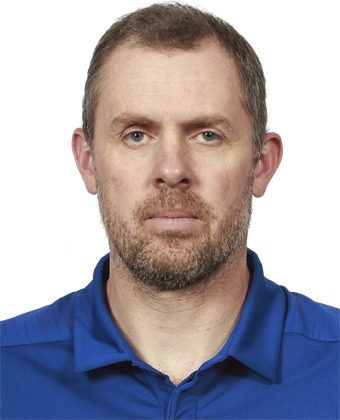 Kevin Bourgoin returns in 2020 for his fourth season with the club and first in the his new role as receivers coach after previously working with the running backs.

The Bombers had incredible success running the ball over the past three years, with Andrew Harris winning three consecutive rushing titles and the Bombers leading the Canadian Football League with 147.9 yards rushing in 2019, after leading the league in the same category in both 2017 and 2018.

Winnipeg averaged 134.9 yards rushing per game in 2018, as Harris set a career high with 1,390 yards along the ground. The Bombers also paced the CFL with 23 rushing touchdowns.

In 2017, his first season in the position, Bourgoin helped the Bombers become the leading rushing unit in the CFL with an average of 101.3 yards per game. Harris led the league in rushing yards at 1,035 to earn his first career rushing title and set a new CFL record for receptions by a running back with 105, earning the league’s Most Outstanding Canadian Player Award in the process.

Prior to joining the Bombers, Bourgoin was the associate head coach for the University of Maine from March 2007 to January 2016. In that span, he was the offensive coordinator and quarterbacks coach. He also spent time coaching wide receivers, tight ends, and fullbacks at Maine from 2005-2006. In total, Bourgoin spent 15 seasons at the University of Maine, coaching a variety of offensive positions. He has also held the position of receivers coach at Brown University for five seasons. Bourgoin started his coaching career at Colby in 1997, coaching receivers and tight ends.