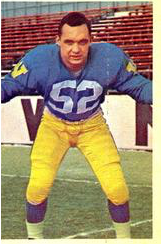 Dave Burkholder joined the Bombers in 1958 after starring at the University of Minnesota and his timing couldn’t have been better. A talented guard and linebacker, Burkholder was part of four Grey-Cup championship teams in his seven years in Winnipeg and was a three-time West All-Star (there were no CFL All-Star teams selected until 1962).