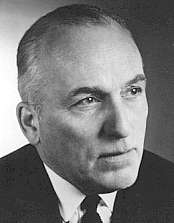 A Winnipegger by birth and an active sportsman – he was a rower of national reknown – Culver Riley joined the Canadian Army in 1939. He returned to Winnipeg after World War II as a Lieutenant-Colonel and a recipient of the Order of the British Empire.

He began working in the insurance business, but was a driving force in the move to upgrade Winnipeg’s sporting facilities in the early 1950s. During his time as president of the Bombers he helped push for the construction of Winnipeg Stadium in 1953 and the Winnipeg Arena two years later. He would then serve as the president of the Winnipeg Enterprises Corporation, which oversaw the construction of the two buildings and managed them.

Riley was also president of the organizing committee for the 1967 Pan American Games in Winnipeg.