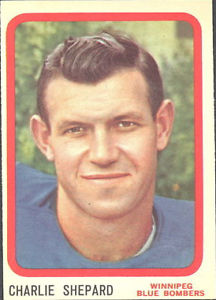 Charlie Shepard was a valuable member of the Bombers Glory Days of the late 1950s/early 1960s. He shared the tailback duties along with Leo Lewis and Gerry James – in 1960 Lewis, James and Shepard finished fourth, fifth and sixth in rushing in the West – and was also one of the best punters of his era.