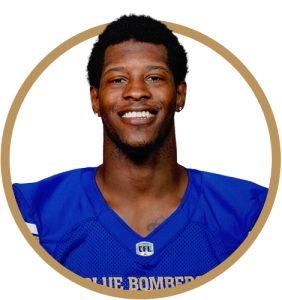 Glass signed a one-year contract with the Blue Bombers on February 10, 2022 after spending the 2021 season in Montreal. He dressed for seven games, registering 27 tackles and adding a quarterback sack.
Through 30 CFL games, Glass has recorded 95 defensive tackles, six special teams tackles, one sack and three interceptions.

Glass joined Edmonton in January of 2019 and then proceeded to have his best year in the CFL. He appeared in 14 games, nine of them starts, and had 29 tackles, with five more on special teams, with three pass knockdowns, two tackles for losses and three interceptions.
Glass suited up for both of Edmonton’s playoff games that November and had a combined seven tackles, one pass knockdown and an interception.

Glass first signed in the CFL with the Als in February of 2018 and played in nine games that season, eight of them starts. He had 39 tackles in his first season and one pass knockdown, while also returning 10 punts for 84 yards.

Glass began his collegiate career at Mount San Antonio Junior College and helped the school win a California Community College Championship in 2014 while earning All-South Coast Conference honours as a defensive back. He then transferred to Fresno State and spent two seasons there, dressing for 23 games with 88 tackles, six interceptions and 15 pass knockdowns while also returning 19 punts for 172 yards and seven kickoffs for 128 yards.