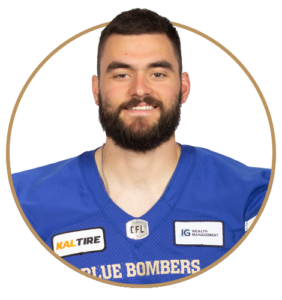 McGuire was signed by the Bombers on May 15, 2019 after attending the club’s free-agent camp in Florida in late April and then participating in mini-camps with both the Minnesota Vikings and Miami Dolphins. He dressed for all 18 regular-season and the three playoff games, seeing action in two games against Calgary near the end of the year, completing two of three passes for 17 yards and rushing three times for 19 yards.
McGuire signed a one-year contract extension on December 31, 2020.

McGuire put up spectacular numbers during his days with the University of Western Illinois Fighting Leathernecks, and left as the school’s all-time leader in passing yards (9,819), passing touchdowns (72), completions (771) and attempts (1,291). His 9,819 passing yards ranks second all-time in the history of the Missouri Valley Football Conference. McGuire was named the school’s Male Senior Athlete of the Year in 2018 and was an Honorable Mention All-Missouri Valley Conference player in 2016 and 2017.