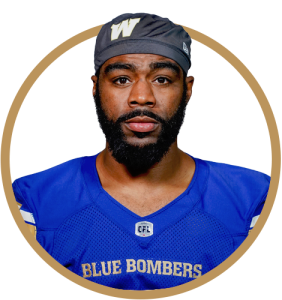 Bailey enjoyed a break-out season in 2021 for the Blue Bombers, as he started all 14 regular season games and posted career numbers with 52 receptions for 629 yards and five touchdowns. That success continued into the postseason, where he added six more catches for 116 yards — including a touchdown in the Western Final and a critical two-point conversion in overtime of the Grey Cup win.

His 2021 season also included his first 100-yard receiving game as a Blue Bomber — on August 29th he pulled in four passes for 108 yards in a win over the Calgary Stampeders.

On February 2, 2022, Bailey signed a one-year contract extension to remain with the club.

Bailey waited patiently for his opportunity — both in his professional career and in his first season with the Blue Bombers — and when it came he proved to be a productive and reliable contributor to the offence. Made his Bombers debut as a designated import in Toronto on August 1 and then was inserted into the starting lineup against Saskatchewan in the Banjo Bowl, pulling in five passes for 33 yards in the victory. Bailey dressed for five regular-season games in 2019, starting four, and finished with 19 catches for 206 yards, adding four receptions for 26 yards in the three playoff wins — all starts.
Bailey signed a one-year contract extension on January 14, 2021.

Bailey played four seasons for the Delaware Valley University Aggies, finishing with 165 receptions for 3,138 receiving yards and 29 touchdowns. Bailey finished his college career as the school’s all-time leader in receiving yards and second in receiving touchdowns. In 2015, Bailey signed with the Philadelphia Eagles as an undrafted free agent. He also spent time with the BC Lions, Jacksonville Jaguars, San Diego Chargers, Cleveland Browns and Carolina Panthers.