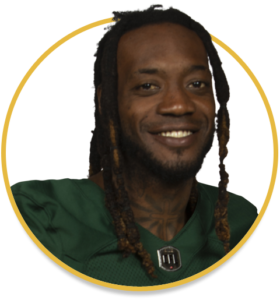 The Eskimos signed Johnson as a free agent on May 17, 2019 and he started in 17 games, starting at both halfback and cornerback and finishing with 43 tackles, two interceptions, one sack, nine pass knockdowns and one tackle for a loss.

He was productive in the postseason, picking off three passes in Edmonton’s Eastern Semi-Final win over the Montreal Alouettes, becoming the first player in the CFL to have three interceptions in a playoff game since Darrell Moir of Toronto in 1986. He then added a team-high six tackles and a sack in the Eastern Final loss to the Hamilton Tiger-Cats.

Johnson appeared in four games for Ottawa after signing with the club as a free agent on March 14, 2018, registering 11 tackles before his release on July 17, 2018. He was signed by the Ticats a month later and dressed for nine games, picking up 10 tackles on defence and three more on special teams. He also played in both the Eastern Semi-Final, where he recorded one tackle, and the Eastern Final, where he chipped in with seven tackles.

Johnson signed with the Jaguars in February of 2016 and played eight games with Jacksonville that season. He was placed on injured reserve in the summer of 2017 before being released in October of that year.

Johnson attended Purdue from 2009 to 2012 and appeared in 49 games, with 36 starts, recording 186 total tackles, two quarterback sacks, three forced fumbles and one fumble recovery, and six interceptions – one of which was returned for a touchdown. He was twice named to the Academic All-Big Ten Team (2010, 2011).