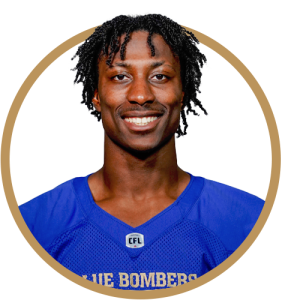 McCrae signed with the Blue Bombers on May 6, 2022.
He first came to the Canadian Football League with the Toronto Argonauts in 2021, but was released during training camp.
McCrae had an outstanding college career at the University of Central Florida, finishing his career with 2,620 rushing yards — fourth-most in program history. His 29 career touchdowns also ranked fourth all-time in UCF history. His yards-per-carry average of 6.45 yards also ranks first in school history.
In 2020, McCrae’s senior season, he led the Knights in rushing yards with 758, scoring 10 touchdowns, ranking him fourth in the American Athletic Conference.
McCrae also excelled off the field, as he was named to the NFF Hampshire Honor Society for maintaining a 3.2 or higher GPA during his Knights career.