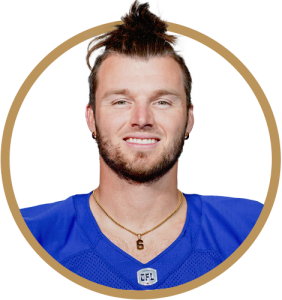 Brown dressed for the final two-regular season games in his rookie campaign for the Blue Bombers. He came off the bench in the regular-season finale loss in Calgary and completed 7-of-14 passes for 49 yards with no touchdowns or interceptions while rushing seven times for 44 yards.

Brown played his college ball for both the University of Hawai’i and Oklahoma State, finishing up his collegiate career for the Cowboys in 2019. Named team captain by his teammates that season, Brown appeared in seven games — starting the final three after an injury to starter Spencer Sanders –and completed 67.3 percent of his passes for 810 yards with seven touchdowns against one interception.

Brown was a graduate transfer to OSU in 2018 after two seasons at Hawai’i. He was the recipient of the coach Tom Kaulukukui Offensive Captain Award in 2017 and named one of four team captains prior to the season. During his two seasons with the Rainbow Warriors Brown threw for 5,273 yards with 37 touchdowns and 15 interceptions. He was named MVP of the 2016 Hawai’I Bowl after throwing for four TDs and rushing for another in a 52-35 victory over Middle Tennessee.

Brown played his freshman year at the College of San Mateo in San Mateo, CA and threw for 21 TDs while rushing for six others in being named the team’s MVP.