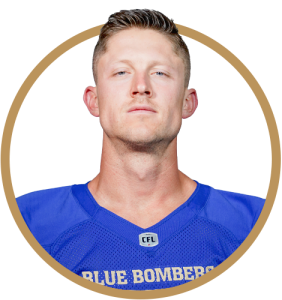 Prukop signed a one-year contract with the Blue Bombers on February 16, 2022, just two days following his release from the Elks.
In eight games last season with the Elks, Prukop completed 18 of 26 passes for 183 yards with one TD and two interceptions while rushing 27 times for 134 yards and two scores. He had started the season in training camp with the Calgary Stampeders after signing with that club in 2020, but was released at the end of July.
Prukop has dressed for 49 regular-season games in his career with Edmonton and the Toronto Argonauts, completing 36 of 56 passes for 467 yards with four touchdowns and four interceptions while rushing 38 times for 173 yards and two touchdowns.

Prukop first signed in the CFL with the Argonauts in May of 2017 and suited up for nine games that year as the team’s third-string QB, but seeing action on special teams and recording six special-teams tackles. He didn’t dress for playoff games that fall, but was a member of the club’s Grey Cup championship team.
He dressed for 14 games in 2018, but it wasn’t until 2019 that he saw his first action as a quarterback as he completed 18 of 30 passes for 284 yards with three touchdowns and two interceptions while rushing 11 times for 39 yards.
Included in those numbers are the totals from his one career start — a 21-18 loss to the Hamilton Tiger-Cats on November 2 in which he completed 4-of-9 pass attempts for 118 yards and a 75-yard touchdown strike while rushed three times for 14 yards.

Prukop began his collegiate career at Montana State (2013-15) where he put up superb numbers by throwing for 5,584 yards with 46 touchdowns and 16 interceptions. He then transferred to Oregon in 2016 after graduating to pursue his Masters in non-profit management and dressed for six games as a senior, completing 65.7 percent of his passes for 1,214 yards, eight touchdowns and two interceptions.