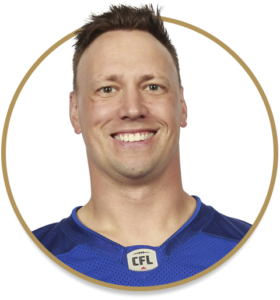 Now the CFL’s longest-serving player, Rempel hit the 200-games played mark in the win over Ottawa in early July. He appeared in 15 regular-season games, missing three due to injury, and played in two of the three playoff games after being out out the lineup for the Western Semi-final win in Calgary. He was in the lineup for the Western Final and the Grey Cup, earning the second title of his career.

Rempel remains the best long-snapper in the CFL, and was so honoured by the CFL Players’ Association with a berth on their all-star team for the second straight year. He is critical to the success of Bombers kicker Justin Medlock, who has been named the Bombers Most Outstanding Special Teams Player in three consecutive seasons. Rempel has not missed a game since rejoining the
club in 2015. The 2019 season will be Rempel’s fifth with Winnipeg and 15th in the CFL.
Rempel signed a two-year contract with the club on January 9, 2019.

Dressed for all 18 games as the Bombers long-snapper, marking the third consecutive season he dressed for every game. Chipped in with two tackles on special teams en route to be named to the CFLPA All-Star team.

Signed with the Bombers on May 30, 2015 as a free agent. Dressed for 18 games that season, adding three tackles on special teams. Played a critical role in helping Justin Medlock earn the CFL’s Most Outstanding Special Teams Player award in 2016, serving as the long snapper for all 18 games.

Originally drafted by the Edmonton Eskimos in the fifth round (35th overall) of the 2004 CFL Draft as a receiver. Did not see action with the Esks; joined the Bombers later in 2005 and dressed for nine game. Moved to Toronto in 2006 and played in 16 games over the next two years, catching five passes for 70 yards in 2007. Spent 2008 with Hamilton, catching three passes for 48 yards in 11 games. Returned to Toronto in 2009 and set a career best with nine receptions for 76 yards. That same season he began working on extending his career as a long-snapper. After the 2013 season he got a look with the Chicago Bears in 2014 and then joined the Saskatchewan Roughriders for the final six games of the 2014 season. In 2009, Rempel was also a member of Lyndon Rush’s bobsleigh team that won the 2009 Canadian four-man championship.