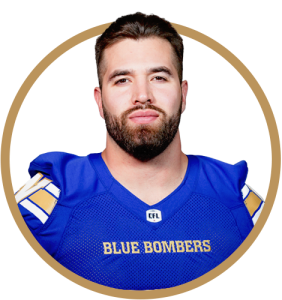 Sayles signed with the Blue Bombers on April 4, 2021 and had a very productive first season in the CFL. He dressed for all 14 regular-season games, with eight starts, as well as the Western Final and Grey Cup.
He finished with 28 defensive tackles and five quarterback sacks — third on the team behind Jackson Jeffcoat (9) and Willie Jefferson (7) — and added three more tackles in the Western Final.

Sayles suited up for five games with the Battlehawks in 2020 and registered 8.5 tackles and one sack before the XFL ceased operations due to the COVID-19 pandemic.

Sayles signed his first pro contract with the Los Angeles Rams in 2017 as an undrafted free agent. He joined the Pittsburgh Steelers in 2018 and then split 2019 between the Birmingham Iron of the Alliance of American Football and the Steelers. In eight games with the Iron, Sayles had 13.5 tackles and a sack.

During his college days, Sayles suited up for 45 games over four years with the Ohio Bobcats. He earned Second Team All-Mid-American Conference honours in his senior season, 2016, after racking up 33 tackles and six sacks. Over his four years at Ohio he had 111 total tackles, 12.5 sacks and three fumble recoveries.