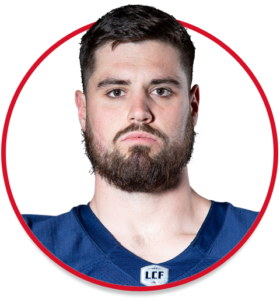 Calver was signed to the Bombers practice roster on September 6, 2019 following his late August release by the Ottawa REDBLACKS and dressed for five games in a special-teams role in September and October, as well as the Western Semi-Final win over Calgary. He appeared in one game with Ottawa prior to his release.

Montreal first signed Calver as an undrafted free agent on January 22, 2018. Calver dressed for 17 games in his rookie season, registering nine special-teams tackle and adding a forced fumble. He suited up for five games with the Alouettes in 2019, picking up four special-teams tackles, before his release.

Calver played 36 career games in five seasons for the Wilfrid Laurier University Golden Hawks, amassing 170.5 tackles, 8.5 sacks, while forcing two fumbles and recovering five. In 2017, the London, ON native racked up 31 tackles, 26 of which were unassisted as well as one quarterback sack. He was voted an OUA second-team all-star. The 24-year-old helped the Golden Hawks win the OUA championship in 2016. In six career playoff games, Calver was a force for Laurier as he made 30 tackles and two sacks. He also forced two fumbles and recovered one while knocking down a pass.