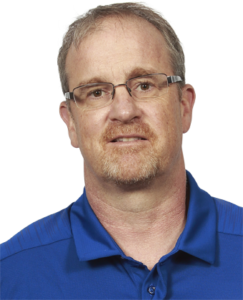 Ted Goveia returns in 2020 for his seventh season as the Bombers Assistant General Manager, Director of Player Personnel.

Goveia first joined the organization in December of 2013.

Goveia plays a key role in scouting talent in both Canada and the United States, and works closely with GM Kyle Walters and Danny McManus, Assistant GM/Director of U.S. Scouting.

Goveia previously held the role of Director of Player Personnel with the Toronto Argonauts, as well as coordinating the team’s CFL Canadian Draft. He first joined the Argos in 2010 as an assistant coach after previously working for 15 years in coaching and recruitment capacities throughout the Canadian college and Canadian junior football ranks. Those experiences include time at the University of British Columbia (offensive coordinator in 2004, head coach in 2006), McMaster University (receivers, running backs, special teams, recruitment coordinator from 2001-04) and Mount Allison University.

During his days with McMaster the Marauders had some of the most-successful recruitment classes in their history and the team advanced to three straight Yates Cup finals.

Goveia held the position of recruitment coordinator at Mount Allison, his alma mater, from 1994-98 after playing offensive line from 1991-93. In addition, he also served at various times as the Mounties offensive coordinator, offensive line and defensive line coach. He eventually took charge of all administrative aspects of the football program in helping the Mounties set new CIS team and individual records. Mount Allison reached the AUS finals in 1997 and 1997, capturing the championship in ’97. During his days there Mount Allison’s players attainted a 92 per cent graduation rate.

In the junior ranks, Goveia was the head coach of both the Oakville Longhorns and Burlington Braves, leading the latter to three provincial finals. He also coached at Assumption High School in Burlington, another alma mater, and was a guest coach at Argos training camp from 2001-08.