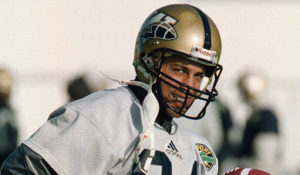 Robert ‘Flash’ Gordon suited up for six seasons for the Blue Bombers and, upon his retirement, ranked ninth on the club’s all-time receiving yardage list with 4,474 yards on 288 receptions, including 20 touchdowns.

An immensely-popular teammate during his days with the Bombers and over the course of a 13-year Canadian Football career that also included stops in Ottawa, Toronto, Edmonton and B.C., Gordon was a reliable and gritty receiver who could make the tough reception in traffic, run a precise route for a first down and take a defender deep for a score.

Now a coach and a personal trainer, his interests extended beyond the football field as he had roles in five different Hollywood movies, including ‘Any Given Sunday’ and ‘We Are Marshall’, and worked as a talent scout for World Wrestling Entertainment.