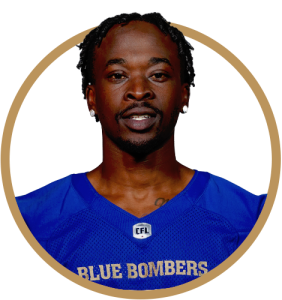 Rose returned to the Blue Bombers on October 20, 2021 after spending the 2020 season on the practice roster of the Cincinnati Bengals and then being waived by the club last September. After his arrival back in Winnipeg, Rose started the final three regular season games and both the Western Final and the 108th Grey Cup. He had five tackles in the trio of regular season games and added seven more in the playoffs.
A veteran of 43 CFL games with Ottawa, B.C. and Winnipeg, Rose has 116 career tackles and 14 interceptions – nine of them as a member of the Blue Bombers.
On February 1, 2022 Rose signed a one-year extension to remain with the club.

Rose was signed by the Blue Bombers as a free agent on February 13, 2019 and had a sensational first season in Winnipeg. He appeared in all 18 regular-season games, finishing with 58 defensive tackles, 11 pass knockdowns, two tackles for losses, and one fumble recovery. He also led the CFL with nine interceptions, including a Pick-6 against the Ottawa RedBlacks on July 19, 2019. Rose then added 15 tackles and an interception in the Blue Bombers three-game playoff run to the 2019 Grey Cup championship.
He was named both a West Division and CFL All-Star.

Rose dressed for all 18-regular season and the East Division Semi-Final for the Lions in 2018, starting 18 of those 19 contests at cornerback. Rose tied for the team lead with five interceptions while adding 32 defensive tackles, four pass knockdowns, two tackles for a loss and eight special-teams tackles.

Rose made his CFL debut for Ottawa on September 29th, 2017 in a game against the Saskatchewan Roughriders, registering five tackles. Rose appeared in four games that season for the RedBlacks, picking up 21 tackles.

Rose first came to the CFL in 2016 as a late-season practice-roster addition of the Toronto Argonauts after National Football League stints with the Los Angeles Rams and Indianapolis Colts. He later signed by Ottawa in July of 2017.

Rose began his college career at Los Angeles Valley College before transferring to New Mexico State in 2013. He appeared in 23 games over three seasons with the Aggies, recording 94 total tackles, five interceptions, two tackles for a loss, eight pass knock-downs and a forced fumble.