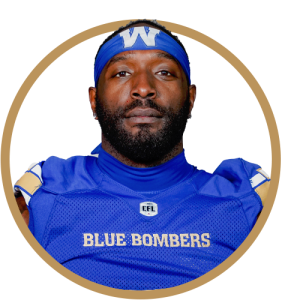 Jefferson continued to stack one good season on top of another in 2022, as he was named the Blue Bombers’ Most Outstanding Defensive Player and a West Division All-Star.

Despite being constantly double-teamed, Jefferson led the club with seven quarterback sacks and added 33 tackles, one interception for a touchdown, two forced fumbles, and 10 pass knockdowns. During the 2022 season, Jefferson also became the first player in CFL history to record 50 sacks and 50 pass knockdowns.

In his three years with the Blue Bombers, he has recorded 26 sacks, four interceptions, two touchdowns and 36 knockdowns – including the 16 he posted in 2019, a league record for defensive linemen.

Jefferson signed a one-year contract extension to remain with the club in 2023 rather than become a free agent on November 26, 2022

Jefferson backed up his outstanding 2019 campaign with the Blue Bombers with a stellar 2021 season in helping the team capture back-to-back Grey Cup championships. Jefferson recorded seven quarterback sacks, 18 tackles, two interceptions – including one for a touchdown – and three forced fumbles as part of a historically-stingy defensive unit. He added a combined five tackles, a quarterback sack and a forced fumble in the Western Final and Grey Cup, helping the Bombers capture the franchise’s 12th title.
Those totals helped him again earn berths on the West Division and CFL All-Star Teams.
In his two years with the Bombers Jefferson has 19 sacks, three interceptions and nine forced fumbles in just 32 games.

Jefferson’s 2019 season was the best of his CFL career. In his first year as a Blue Bomber he posted a career-best 12 quarterback sacks, set a new CFL record for pass knockdowns by a defensive lineman with 16 (best in the league), while also leading the CFL with six forced fumbles and adding 24 tackles, an interception and two fumble recoveries. Jefferson was also dominant in the Grey Cup, registering thee sacks and forcing two fumbles as the Bombers captured their first championship since 1990 and 11th in franchise history.

He signed a two-year contract extension to remain with the club on February 10, 2020.

Jefferson was a defensive force for the Riders in 2018, registering a career-high 10 quarterback sacks and adding 24 defensive tackles, two interceptions — both returned for touchdowns — while forcing two fumbles in 18 games played. In the process, he was named the club’s Most Outstanding Player and Most Outstanding defensive player while being named to both the CFL and West Division All-Star Teams.
He signed with the Blue Bombers as a free agent on February 12, 2019.
Jefferson appeared in all 18 games for the Riders in 2017, posting a career-high 45 tackles with eight sacks and a touchdown. He led the entire CFL in QB pressures in 2017 with 37. Those numbers helped him earn places on both the CFL and West Division All-Star Teams.
Jefferson signed with the Riders on September 28, 2016 after attending training camp with the Washington Redskins. He would appear in five CFL games that fall, registering eight tackles and three sacks.

Jefferson first came to the Canadian Football League in 2014, signing with the Edmonton Eskimos after being signed by the Houston Texans as an undrafted free agent in 2013 and then being released later that season.
He appeared in 35 regular-season games over two seasons with the Eskimos, picking up 40 tackles and registering 10 sacks while forcing three fumbles. He was part of the Eskimos 2015 Grey Cup championship team.

Jefferson began his college career as a receiver at Baylor University before transferring to Stephen F Austin University. He was converted to defensive end there, and was named the  Southland Conference Newcomer of the Year in 2011, his Junior season after leading the conference in sacks with 16.