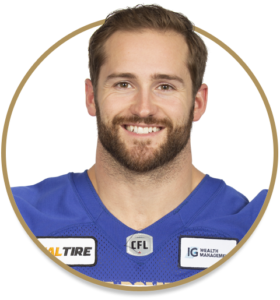 Miles dressed for all 18 games in 2019 and had eight special-teams tackles while adding four more on defence in the regular season, and suited up for all three playoff games en route to helping his hometown Bombers capture the 107th Grey Cup.

As well, Miles was named the 2019 recipient of the Ed Kotowich Good Guy Award, acknowledging a Bombers player who has ‘excellent football ability, is a leader in the locker room, and shows outstanding effort in the community.’

Miles signed a one-year contract extension to remain with the club on February 11, 2020.

Appeared in all 18 games in his second season with the Bombers. Finished with four defensive tackles and continued to make significant contributions on special teams, where he registered 12 tackles, the second-best total in his career. Continues to be one of the most-involved Blue Bombers off the field, making several appearances in the community for the Bombers Tackle Bullying, Break The Silence On Violence Against Women and Hit the Books programs.

Joined his hometown Bombers in March as a free agent and dressed for all 18 games… Tied for third on the club with a career-best 14 tackles on special teams and added five on defence.

Drafted in the fourth round (33rd overall) and played in all 18 games as a rookie… Played in 11 games in each of the 2015 and 2016 seasons… Made seven starts late in the 2015 season and set a career best with 45 tackle while adding a sack and forced fumble.

Spent four seasons with the University of Manitoba (2010-13) after playing at Churchill High School… As a member of the Bisons, he totaled 80 defensive tackles, 19 special teams tackles, one sack, one forced fumble, one tackle for a loss and three fumble recoveries — one for a touchdown.