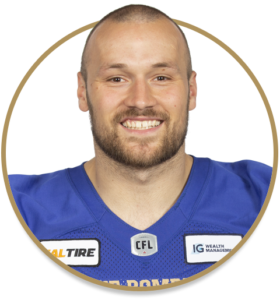 The Bombers selected Hansen with the second overall pick in the Canadian Football League’s inaugural European Draft and by season’s end he had established himself as the league’s best Global player and the face of the CFL 2.0 initiative. A tireless worker, Hansen dressed for every game in 2019 season and impressed enough to become part of the team’s defensive-line rotation, finishing with five tackles, a sack and two forced fumbles – and one thunderous hit on kick cover in the Grey Cup that levelled two Hamilton Tiger-Cats.
Hansen signed a one-year contract extension to remain with the club on January 6, 2021.

Hansen, a 26-year-old product of Flensburg, Germany, previously played last with the Potsdam Royals in the German Football League and has also suited up for the Baltic Hurricanes.