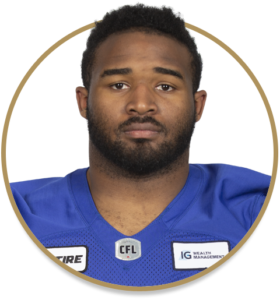 The Bombers brought Richardson aboard on May 18, 2019 after he had spent the 2018 season on the practice roster of the Los Angeles Chargers. Nicknamed ‘Stove’ during his college days, Richardson had an impressive first season in the Canadian Football League, dressing for all 18 games, 14 of them starts, as well as all three playoff contests.
Richardson finished with 25 tackles, two sacks and three tackles for a loss from his defensive tackle position.

Richardson had 103 tackles, 28.5 tackles for a loss, 12.5 sacks and five forced fumbles in his 48 games at the University of Minnesota. During his senior season with the Gophers he tallied 23 tackles and added one forced fumble while being named an All-Big Ten Honorable Mention and winning the program’s Defensive Trench Award as the team’s best defensive lineman.
He was named the Gophers Defensive Freshman of the Year in 2014, an All-Big Ten Honorable Mention by the conference coaches in 2015 and an All-Big Ten Third Team in 2016. As well, Richardson was an Academic All-Big Ten in 2015, 2016 and 2017.