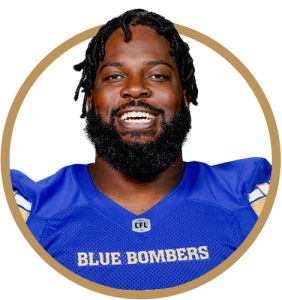 Bryant added Bryant added to his legacy in 2022 as one of the most-decorated linemen in Blue Bombers and Canadian Football League history. A mainstay on the left flank of the offensive line, Bryant was named the CFL’s Most Outstanding Offensive Lineman for a record fourth time, while also being named to the CFL All-Star team for a seventh time. All four of Bryant’s top lineman awards have come during his time in Winnipeg, having previously been saluted in 2017, 2018 and 2021. He was also the runner-up for the award in 2019.
Bryant was also named the Blue Bombers Most Outstanding Offensive Lineman for a sixth time in 2022 and  has been so honoured eight times in his career, including in 2011 and 2013 as a member of the Stampeders. He has dressed for 186 games in his CFL career, including the last 120 in Winnipeg.
He is also a three-time Grey Cup champion, having won in 2019 and 2021 with the Blue Bombers and 2014 with Calgary.

Named to the CFL All-Star team for a sixth time at left tackle, Bryant was also selected as the CFL’s Most Outstanding Offensive Lineman, and in so doing became the first player in league history to win that award three times after having previously been honoured in 2017 and 2018. He was also the runner-up for the award in 2019.
Bryant was also named the Blue Bombers Most Outstanding Offensive Lineman for a fifth time and has been so honoured seven times in his career, also including in 2011 and 2013 as a member of the Calgary Stampeders.
He has been a mainstay on the left side of the Blue Bombers offensive line since first signing with the club as a free agent in 2015. He was part of an offence that led the CFL in scoring in 2021 and anchored a unit that surrendered the fewest quarterback sacks while helping three different running backs compile the second best rushing totals in the league this season.

Bryant served up another spectacular campaign, anchoring the left side of an offensive line that led the CFL in rushing and helped Andrew Harris win another rushing title. Bryant started all 18 regular-season and three playoff games en route to being named a CFL All-Star, Western Division All-Star, CFL Players’ Association All-Star and a finalist for the CFL Most Outstanding Offensive Lineman Award, for which he was the runner up after winning it in both 2017 and 2018.
One of the most-dominant linemen in Bombers history, Bryant has not missed a single game in his five years for the club and is marching toward both the Winnipeg Football Club Hall of Fame, but likely the Canadian Football Hall of Fame as well.
Signed a one-year contract extension with the club on January 5, 2021.

Bryant backed up his superb 2017 season with a spectacular 2018 campaign. Bryant, who has started every game at left tackle since joining the club in 2015 to extend his consecutive-games streak to 2018, anchored the left side of the Bombers offensive line that helped Andrew Harris capture his second-straight rushing title while the offence finished first in points scored. He was recognized as a CFL All-Star for the fourth time in his career and was named the league’s Most Outstanding Offensive Lineman for a second consecutive time, becoming the first to do so since Montreal’s Scott Flory in 2008-2009 and the first Bomber to ever go back-to-back with the award. Hall of Famer Chris Walby is the only other Bomber to win the Most Outstanding Offensive Lineman Award more than once, capturing the honour in 1987 and 1993.
Bryant signed a one-year contract extension on January 17, 2019.

Bryant capped his eighth season in Canada by winning the CFL’s Most Outstanding Offensive Lineman Award — the first Bomber to be so honoured since Dave Mudge in 2001 and the seventh since the inception of the award in 1974… Bryant has not missed a single game since joining the Bombers as a free agent in 2015 and was part of a unit last year that led the CFL in rushing and finished second in scoring… Named to the West Division and CFL All-Star Teams for the third time in his career… Signed to a contract extension following the season, on Dec. 12th.

Bryant joined the Bombers after signing in free agency and following five years in Calgary and has been a mainstay at left tackle. Has not missed a single game in his first three years as a Bomber.

First came to Canada in 2010 after attending training camp with the Denver Broncos as an undrafted free agent in 2009… Became a starter in October of his first year with the Stampeders and was twice named the team’s top lineman (2011, 2013) and twice named a division and CFL All-Star (2013, 2014).

Bryant was a two-year starter at left tackle for East Carolina and helped the Pirates to the Conference USA championship in 2008. Transferred from Elizabeth City State to East Carolina as a walk-on.