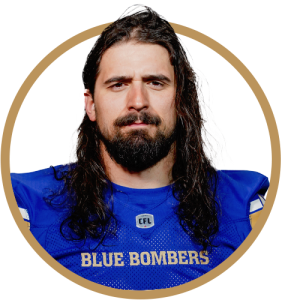 Gauthier signed a one-year contract extension on January 19, 2022 to remain with the Blue Bombers for a sixth season. Entering 2022 he has suited up for 63 games with the club over five years and has not missed a game in the previous two seasons.
Gauthier posted career-best numbers in 2021 while working in a linebacker rotation in the Blue Bombers top-rated defence, finishing with 15 defensive tackles and adding nine more on special teams.

Gauthier dressed in all 18 regular-season games for the first time in his four-year career with the Bombers and suited up for all three playoff games. He finished with 12 special-teams tackles in 2019, tied for fourth-best on the club, and made a touchdown-saving tackle on a punt return in the Western Final that was critical in the victory over Saskatchewan.
Gauthier signed a one-year contract extension on January 8, 2021.

Injuries limited Gauthier to 10 games in 2018, but he continued to be a force on special teams with 11 tackles. Was leading the CFL in special-teams tackles before his injury on July 7, returned after three games before missing the remaining five regular-season contests. Did return to suit up for the Bombers two playoff games.

Appeared in 12 games for the Bombers in his second CFL season and registered 10 tackles on special teams.

Played in nine games as a rookie after being selected in the fourth round, 28th overall, in the 2016 CFL Draft… Recorded seven special-teams tackles… Became a regular in the 44-man lineup by playing in the final seven regular season contests.

Played four seasons with the Laval Rouge et Or, where he totaled 130 tackles… A two-time RSEQ All-Star, Gauthier earned CIS Second-Team All-Canadian honours as a senior.