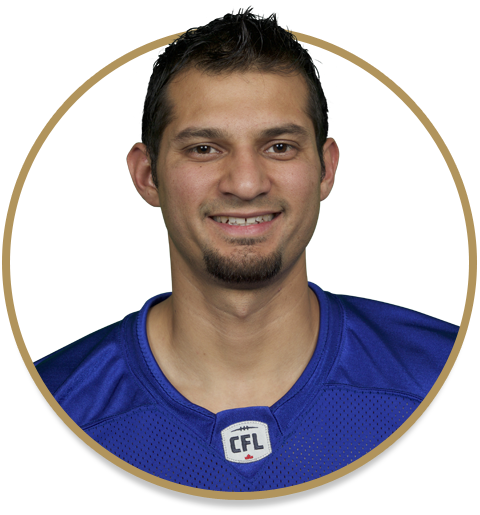 The Bombers acquired Castillo in a trade with the B.C. Lions on October 19, 2021 in exchange for a conditional fourth-round draft pick in the 2022 Canadian Football League Draft.
Castillo had attended training camp with the Tennessee Titans in 2021.

Castillo was selected by the Houston Roughnecks in the 2020 XFL Supplemental Draft and appeared in five games with the club in 2020, connecting on five field goals, before the league ceased operations in April of that year.
Castillo re-signed with the B.C. Lions in April of 2020 and then opted out of his contract on August 29, 2020 with the cancellation of the CFL’s 2020 season.
Castillo was then signed by the New York Jets on October 14, 2020 and made his debut in a Week 7 game against the Buffalo Bills. He was later released by the Jets in January of 2021.

Castillo has a sensational 2019 campaign with the Lions, being named both a West Division and CFL All-Star after connecting on 41-of-45 field-goal attempts (91.1 percent), including five field goals covering 50 yards or longer. He also handled the punting chores for the first four games of the ’19 season before the Lions added veteran punter Josh Bartel.

Castillo was originally signed by the Blue Bombers in 2015 and appeared in four games for the club that season, going 10-of-13 (76.9 percent) on his field-goal attempts, including a 5-of-5 performance in his debut. He also punted eight times for a 43.5-yard average in the club’s regular-season finale that year.
The Blue Bombers signed Justin Medlock in free agency prior to the 2016 season and Castillo spent time on the club’s practice roster that year before joining the Ottawa RedBlacks for two games. He then joined the Hamilton Tiger-Cats in 2017 and appeared in 14 games, connecting on 29-of-34 field-goal attempts (85.3 per cent) and punting 93 times for a 45.1-yard average before suffering a season-ending ACL injury in October of that year. He did not play in 2018.

Castillo spent four seasons West Texas A&M and appeared in 51 games for the Buffaloes, finishing his college career by connecting on  62-of-79 (78.5 per cent) of his field-goal attempts. He was named an All-Lone Star Conference All-Star four times and also set a Division II record for career points with 437. Castillo was named the 2013 Fred Mitchell Award winner as the top placekicker in FCS, Division II, Division III, NAIA and NJCAA.