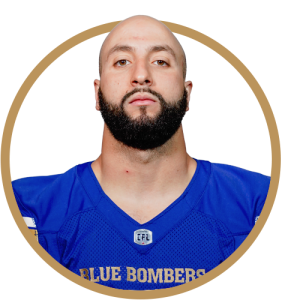 The Blue Bombers selected Kramdi in the second round, 16th overall, of the the 2021 CFL Draft. In his rookie season Kramdi had two stints on the injured list, but did appear in seven regular-season games as well as the Western Final and Grey Cup and finished with one special-teams tackle.

Kramdi carved out a role on both defence and special teams during his time at the University of Montreal. In seven games during the 2019 season, he finished with 32.5 total tackles, eight tackles for loss, 4.5 sacks, and two pass breakups while helping the Carabins advance to the Vanier Cup.
During the 2018 season, he had 19 tackles, eight assists, two tackles for loss, one sack, and one interception. He was named an RSEQ Defensive All-Star for his efforts.