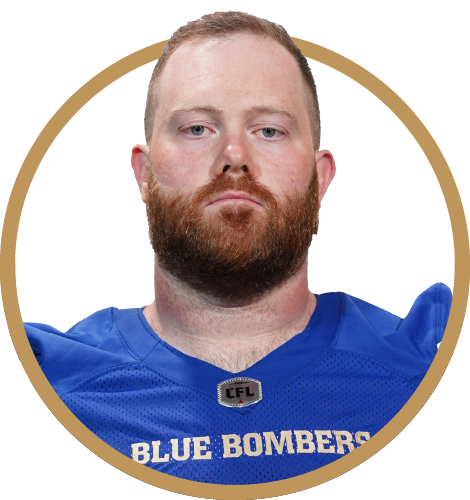 Neufeld put together his second-consecutive all-star season, having been named to both the West Division and CFL All-Star teams in 2022 after earning his first berths on those squads in 2021.

Neufeld appeared in 17 regular-season games in 2022 and in both the Western Final and Grey Cup at right guard, helping the Blue Bombers offence finish second in points, sacks surrendered and rushing yards and first in touchdowns, while running back Brady Oliveira posted the first 1,000-yard rushing season of his career.

He has now appeared in 136 regular-season games, including 99 with the Blue Bombers.

Neufeld signed a one-year contract extension on November 24, 2022 to remain with the club in 2023 rather than head into free agency.

Neufeld had a sensational 2021 season, showing his versatility by making starts at both right guard and right tackle and earning the first all-star nominations in his career after being named to both the West Division and CFL All-Star teams.
Neufeld appeared in 13 of the 14 regular-season games and in both the Western Final and Grey Cup, helping the Bombers lead the CFL in scoring, finish second in rushing while surrendering the fewest quarterback sacks. His work was critical all year as the Bombers captured their second straight championship with a win over the Hamilton Tiger-Cats in the 108th Grey Cup.
After the season, Neufeld was honoured as the 2021 recipient of the club’s Cal Murphy ‘Heart of a Legend Award’, presented to the player who has shown ‘outstanding sportsmanship and dedication to the Canadian Football League and the community.’
Neufeld signed a one-year contract extension to remain with the club on January 11, 2022.

A season that began in frustrating fashion ended in glory for the veteran offensive lineman. Neufeld was injured just before the opening of training camp and missed the first 12 games of the year while on the injured list. Returned to the starting lineup on September 21 in Montreal and started the final six regular-season games and three playoff contests, including the Grey Cup victory.
Played his part in the Bombers leading the league in rushing and with Andrew Harris capturing his third-consecutive rushing title and was considered among the best guards in the CFL by season’s end, despite missing two thirds of the campaign.
Signed a one-year contract extension to remain with the club on December 10, 2019 and then again on January 19, 2021.

Put together his best season as a pro, starting all 18 games at left guard for an offensive line that was critical in the Bombers leading the league in scoring and helping Andrew Harris win his second consecutive rushing title.

Appeared in all 18 games in 2017, starting the final two regular-season games and the West Division Semi-Final.

Acquired from the Saskatchewan Roughriders on October 10, 2013 for DE Alex Hall and a second-round pick in the 2014 CFL Draft. Neufeld Appeared in three games with the Riders in 2013 before the trade but did not play for the Bombers that season after the deal and then appeared in 27 games over the next three years – eight in 2014, 12 in 2015 and seven in 2016 – as he battled through a series of injuries.

Drafted in the fifth round of the 2010 CFL Draft by the Riders, 33rd overall, and opted to return to the University of Saskatchewan after training camp. Appeared in 37 games for the Riders from 2011 through to his trade to Winnipeg in 2013.

Spent four seasons at the University of Saskatchewan (2008-2011) and as a senior was named a CIS First Team All-Canadian and Canada West All-Star. Helped the Huskies to the best offensive record in the CIS in 2011. Played in the East-West Bowl in 2011.