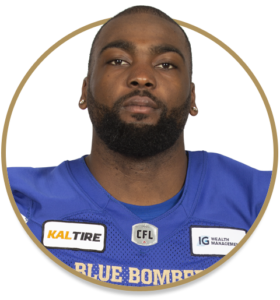 Acquired
Traded from the Winnipeg Blue Bombers on June 24, 2019, in exchange for the rights to a negotiation-list player.

Personal
Choudja was born in Cameroon and came to the United States when he was 10 years old. He established school records with 25 tackles for loss and 18 sacks during his senior season at Freedom High School in Oakley, Calif.