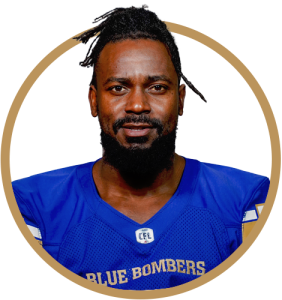 An under-rated and versatile defensive back, Taylor started all 12 games he dressed for the Blue Bombers in 2021, as well as the Western Final and 108th Grey Cup. Taylor was a key part of the team’s dominant defence, finishing the season with 31 tackles, four pass knockdowns and one tackle for a loss and made a critical pass knockdown in the Western Final win over Saskatchewan that helped propel the Blue Bombers to the Grey Cup.
Taylor heads into 2022 having appeared in 51 games over a CFL career that began in 2016 – 16 with the Blue Bombers, 18 with Edmonton and 17 with Ottawa.
On February 7, 2022 he signed a one-year contract extension to remain with the club.

Taylor joined the Bombers on August 19 and made his first start on October 5 in Saskatchewan. He started the final four games of the regular season and all three playoff games, finishing with five tackles, an interception for a touchdown against Montreal on October 12, and one pass knockdown.
In the playoffs Taylor added seven tackles, one interception and two pass knockdowns.
Taylor started the 2019 season with the Edmonton Eskimos, dressing for three games before his release.
On January 7, 2021, Taylor signed a one-year contract extension to remain with the Bombers.

Taylor joined the Eskimos as a free agent on February 14, 2018 and started appeared in 15 games — all starts — for the team that season. He finished the year with 46 tackles, five pass knockdowns, one sack and two tackles for a loss.

Signed by the REDBLACKS as a free agent on March 4, 2016. Taylor dressed for 17 games for Ottawa over the 2016-17 seasons, making 16 starts. During that two-year span he had 62 tackles, one interception, one forced fumble and eight pass knockdowns.

Taylor did not play college football, but was the starting point guard for Florida International University’s basketball team. After playing football up until his sophomore year in high school, Taylor picked up the game again by playing in the Stars Football League. He attended FIU’s Pro Day and after running two of the fastest 40 times at the 2012 NFL Scouting Combine, and was later signed by the Minnesota Vikings as an undrafted free agent. He saw time with the Orlando Predators in 2015 before signing with Ottawa.